A jobless couple set a tent on the main square of Kavala, Northeast Greece, and started a hunger strike. The aim of their desperate action? To get a job! Lazaros Papadopoulos, 60, and his wife Frideriki Toka, 40, saw no other solution to raise attention to their problem. They have been without a job since a couple of years. They reached the tip of their hopelessness iceberg  when their landlord threatened them with eviction shouldn’t they be able to pay due rents of seven months. 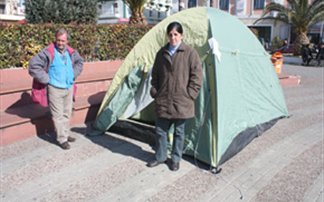 Papadopoulos, a driver, concluded his last temporary work contract in December 2009. Toga, a cook’s assistant, has been without a job in the last four years.

As the police has removed their tent right away on Friday, the couple spends the days and nights outdoors, practically  in the middle of nowhere, hoping to get the attention of some merciful employer. “We will continue until we both get a job” they said to local newspaper ProiniNews.

Residents of Kavala provide them with water, a doctor from Greek Red Cross has examined Lazaros Papadopoulos.