More and more of my female friends increasingly complain about the deceasing performance of their husbands and boy friends. These women, whether married, in relationship or singles, they all unanimously blame the economic crisis and the austerity measures for the poor libido performances.  Greek men seem to be exposed more to IMF-stress than women. Then what is a man without a job, what is a man if he can’t feed his family? IMF-austerity makes it so difficult for hunters, then there is not so much to hunt around… Or men just cope differently with stress… Are men really so vulnerable?

Sex in Times of  IMF

Chatting around with friends, I realized that married women or those in relationship experience serious problems when it comes to the 3-letters word. In fact, it doesn’t come at all, they say.

X said, she can’t stand her husbands’ hanging nose when he enters home after a hard working day with almost zero revenues – the guy has a retail shop.

Y, the wife of another retailer, bemoans, that last time she saw “Christmas” was before the last V.A.T. increase in June 2010.

Z worries about her boy friend’s new addiction: watching non-stop depression causing news about the economy – the guy is jobless since September 2010.

Previously to X, Y and Z, I had heard the complains of T, U and V.

For example, T had found out that her hubby had a horrifying secret hobby: calculating his IKA stamps and his pension perspective – the man is 60 years old.

U’s boy friend cannot sleep at night out fearing about his job – the man is a highschool teacher.

V complains that the IMF-guys have deprived her of her husbands’ arms since almost a year.

Singles like O, R and S complain that they can’t even flirt because “How can I fall in love with somebody who keeps talking about austerity measures and income cuts?” so said R.

“There is a strict austerity in sex although not imposed by the government” states Q.

And S wonders: “What’s the good about competitiveness if I don’t get a single guy?”

Now Greek women try to find solutions to the low libido performance of husbands, boy friends and those refusing to be boy-friends and future husbands.

N proposed to get organized “We need to get together asap”.

O agrees and urges “Only united we can get solutions”.

P, a lawyer,  is convinced they should sue somebody about this new social phenomenon on the rise with incredible negative impacts in the consistency of the society. P’s proposal is being applauded by all women concerned.

However there is a major problem causing women real headaches – next to the sex austerity: Who to sue for the Greeks’ low libido performance?

K proposes to sue the government for taking these strict austerity measures. L agrees and argues, “It is the government’s decision to cut all wages, bonuses and pensions”.

M is not sure and tends to sue former governments for bringing the country close to bankruptcy.  H says, she had some former ministers in mind.

I. said, they need to sue Goldman Sachs for tricking with Greek state bonds.

J proposes to sue all rating agencies because every time they downgrade Greece she gets ‘downgraded’ in bed as well.

In contrast, G  proposed to sue all those proposing ‘rebt destructure’ – G suffers an occasional cold turkey after her husband closed down his shop in October 2009; she meant yo say ‘debt restructure’ -.

D meant Angela Merkel is to blame for all the misery.

E, and F are convinced the law suit must be against the IMF for its anti-social measures. C’s idea is to sue the IMF-Chief personally for his insulting statements. “That weekend I almost thought I’d be a widow, hubby got so angry and his blood pressure rose parallel to the Greek bonds spreads.” she recalls.

B agreed with all the others. A. summed up all the ideas and concluded : “For sure we have to launch a lawsuit and ask a money compensation for pain and suffering“.

P, the lawyer,  jumped in between and explained that

24 Greek women can not be wrong, can they?

Apart from the fact that some readers may describe the above article as ‘funny’ and ‘exaggareted’ there is a bitter reality behind it – and behind every bedroom closed door.

By the way, a poll  conducted last January among 1,000 men and women, aged 24-64 in and around Athens showed that 84% experience a libido decrease after watching news, information programs and talk shows referring to economic crisis, austerity measures and unpunishment.

P.S. While I was writing this post, the Prime Minister was delivering a speech live on TV; his second within a day. I think I was somewhere between woman O and P when I heard the word “Recovery!” (Ανόρθωση) – But he was just talking about the “Recovering of the country”… And as we all here know, the citizens have to keep paying for the country’s recovery. 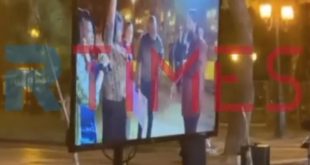