Total Failure of IMF-Program in Greece

May 24, 2011 Economy Comments Off on Total Failure of IMF-Program in Greece 71 Views

Eleven million Greeks are depressed – one day after the news austerity measures package proclaiming the sale off of the country, taxes hikes and pensions decreases. And there comes the Finance Minister George Papaconstantinou admitting the total failure of the economic program as dictated, imposed and implemented with the consulting aid of Greece’s lenders International Monetary Fund, European Union and European Central Bank.

“There is money until July 15, the country is at dangerous junction” Papaconstantinou told journalist Alexis Papachelas during a broadcast in private television network Skai. What the minister said exactly was that without the fifth trance of the €110 billion loan, the state would be unable to pay salaries and pensions and other state expenses.

“But aren’t there any reserves?” the journalist asked the minister, and he replied: “Some, a little, but not enough”

One year after the Memorandum of Understanding, or else the IMF-Memorandum, one year after three Value Added Tax hikes, new taxation law, wages and pensions cuts, special taxes and special contribution and the state funds are being admitted to be empty. The strict austerity didn’t manage to fill up the state pockets, to bring revenues.

So many wonder and thus very correctly: Why did we do all these sacrifices?

Further, the Finance Minister acknowledged that the economic program failed to lead the country back to the markets, that there have been delays and error estimations. However the problem goes beyond Greece according to his opinion. 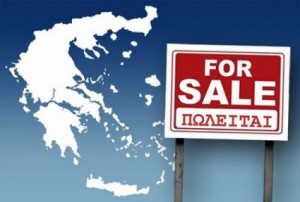 Of course, even two months ago, Papaconstantinou kept claiming that Greece will return to the markets at the end of 2011…

OK, there is a major economic problem, Greece is at the same economic point as in December 2009, when new elected Prime Minister Papandreou sought the help of IMF and the advice of his socialist friend Dominique Strauss-Kahn. One step before declaring ‘default’ , one step away before declaring ‘unable to pay the bills’.

Under the immense pressure of collapse, the government gave the green light for the privatization of state-run enterprises. Couldn’t they do it one year earlier, when they’d had better chances for better prices?

They could but they didn’t. Then they had to feed the army of their voters. And still. Unable to bring the state spending in order, the government grabs the old recipe, the easy and unjust: Tax hikes and wages/pensions cuts.

A measure proven to be a failure. Then the patient is dying. The patient is just one plug away from officially declared dead.

No, no politician, not even the Finance Minister thinks to resign. Power is sweet and idle men believe they can still save the country… That’s falsely understood patriotism, guys!