At least 300,000 Indignant Greeks protested in Athens on Sunday in the biggest rally of the last three decades. The city’s downtown burst with men and women, young and old, employees and jobless, pensioners and self-employees, angry and frustrated about the IMF/EU/ECB Memorandum and the Greek government, outraged about the additional austerity measures. They chanted “Thieves!” and “Traitors” and “Get Out of Here”. Did the government receive the message? Frankly, I don;t think so…

Read what we reported earlier in our Live Blogging:

6.30 pm :Never ending crowds of people keep flocking to Syntagma Square. Half an hour after the start of the mass protest at 6 p.m. and the area in front of the Parliament is already overflooded with  people.

Greek media report of increased police forces around the Parliament.

Earlier on Sunday afternoon, police set barricades between the Parliament building and the people.

Main avenues of Athens downtown have been closed to traffic.

7.00 pm : Lots of Greek Flags, also Flags from Spain, Portugal and Argentina – Organisers have brought up megaphones – they call people not to chanting swearing slogans 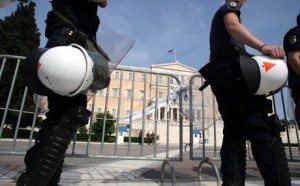 Barriers in front of Greek Parliament 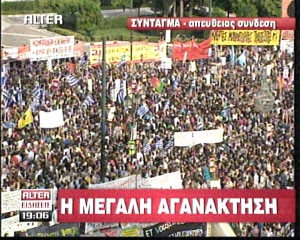 ﻿7.47 pm: Men, women, children, young, old – many Flags from Portugal – Banners – Crowds stand from Voukourestiou down to Zappeion , a radius of 600 m

8.10 pm Family with children came from Crete to join the protests as they can’t pay any more taxes

8.20 pm﻿ “I came to protest because I have no hope, no future” man, 45, two years jobless
Whistles, empty tops and even vuvuzelas – maybe politicians will listen after all 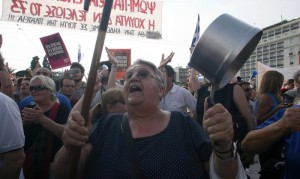 At 9 pm from Syntagma skype connection with Spain and Italy

9.15 pm: more than 100,000 indignant Greeks -housewives, pensioners, jobless, students
“I will soon have no money to feed my children” woman, 40, since 6 months jobless

9.25 pm Slogans: “thieves” , “traitors” -there have been small scale attempts to provoke some incidents –

this is the biggest spontaneous & peaceful political rally of the last 3 decades!

9.40 pm Metro still closed at Syntagma Sq. – People getting out at Panepistimiou & Evaggelismos stations are hindered by police to reach Syntagma Square 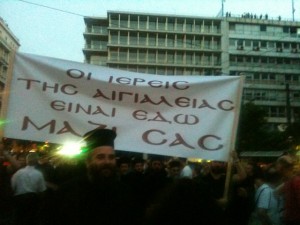 Media speak of more than 100,000 people. Athens downtown is bursting! 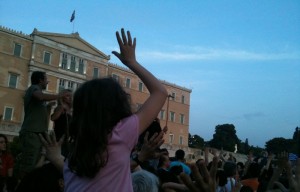 Banner: “Merkel Cow, you won’t see a Drachma from Greece”

10.38 pm People keep coming at Syntagma Sq –
“I’m here because they destroyed Greece” man
“How can I live with 500 euro pension? and now they want me to pay taxes. Shoo!” man
“They must go away, they’re traitors” woman 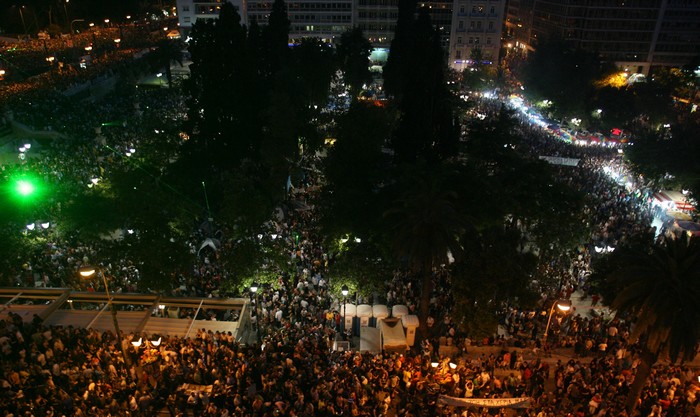 11.30 pm sorry for live streaming inconvenience! – we just ‘borrow’ the link – normally it returns a couple of minutes later

11.50 pm Protesters slowly withdraw from Syntagma Sq – Greek media report of more than 300,000 (some even of 500,000 ) Indignant Greeks who gather to send a loud message to the government. They shouted “No to Troika Memorandum, No to Greece’s sell-off, No to impoverishment – We don’t pay”. Did the Greek politicians receive the message?