Der Euro is dead – Let’s bury it! German weekly magazine DER SPIEGEL dedicates the front page of its Monday edition with a sophisticated funeral arrangement.  The coffin is covered with the Greek flag, the picture of the deceased shows the relatives’ deep mourning through a black ribbon. The Title reads: “Sudden and Expected -Obituary for a common currency”

The SPIEGEL claims that the Eurozone developed to the biggest danger for the future of Europe.” It  notes that ” the Euro chains together national economies that do not fit together. However the politicians bet on more new programmes. This is the wrong way.”

Furthermore, DER SPIEGEL believes that ” Europe is threatened  economically and technically and as historical experiment, it has already gone bankrupt. It concludes that “the citizens, especially the young ones, do not know what to do with the EU” that they are unhinge with what the governments do with their money and that millions of them take out to the streets”. 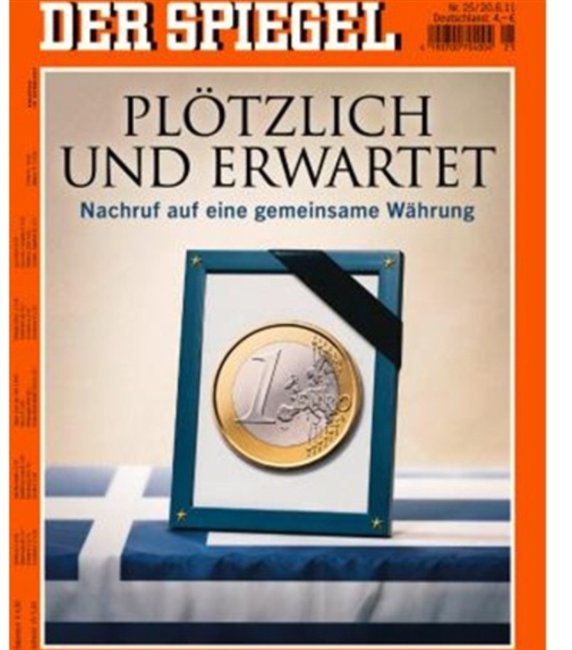 I fully agree with DER SPIEGEL that the Euro destroyed the European Union. However I would strongly disagree with the photo arrangement. The coffin should be covered with the German flag, as it is the German exports that profited from the common currency, after all. And the German banks that profit form the loans interest rates. Isn’t it so?

Furthermore, I would still question the German motives for abandoning the German-French idea of a “two-speed Euro-Train”. Thats was back in the beginning of the 1990’s but we haven’t forgotten it yet. Maybe, DER SPIEGEL does indeed write about Germany’s political responsibilities on the issue. Unfortunately I just got this short news excerpt.