Remember Jack? The elderly dog from Elefsina, who was grieving the brutal murder of his owners by criminal culprits? Exactly this Jack plays the leading role in a wonderful  short film about the effects of the economic crisis on Greek pets!  fter having recovered from the murder trauma in the arms of an experienced dog trainer, Jack agreed to play the leading role in the  short film called “Thanassis or Bruno”. Talented and sovereign, with all the features of a real great star, an actor with amazing potential, Jack tells the story of a stray dog who suffers from the economic crisis. But who manages with his stoic temperament to overcome the hardships and try to make a living on his own. 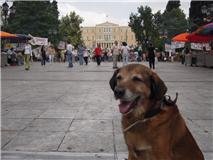 The plot is about an Athens stray dog with a very common name,”Thanassis”. He gets adopted by a rich family and is renamed to noble “Bruno”. However the family gets hit by the economic crisis, loses everything and  abandons him. His wandering paws take him to Syntagma Square where he meets the Indignant Greeks, two-legged and four-legged ones. Jack alias Bruno,  the dog who has seen the ups and downs of this life, a wise dog with life experience cannot avoid to make  comment on Riot Dog Loukanikos, as well…

This film has been created by Dimitris Sofianopoulos and Chronis Tsichlakis. Most amazing of all, the film has English subtitles!

I have asked a comment by the creators but I couldn’t resist the temptation and make a post before the answer  arrived.

Jack lives happily with his trainer who adopted him the very second day she saw him!

I would appreciate if you go to YouTube and give lots of positive votes on this film, by clicking  here

A bit of Loukanikos here, a bit of Jack there,  the point is that these great dogs give a fresh touch to the Greek economic misery and make people aware of Athens strays or dogs who lose their owners.

Once again, I have to thank all those who got mobilized and tried to help Jack on the first hours after his story was made public.