The day started bad and with a lot of tension. People are angry and feel ignored by politicians, the police has clear orders. The day started bad already at 9 o clock ini the morning with some incidents erupting between protesters and riot police, whens a group of 200 people tried to block a main Athens avenue and prevent lawmakers from accessing the Parliament building. Police fired tear gas, one man was injured.

Latest reports speak of a total of 8 injured this morning due to tears gas and other <means>….

In another incident, protesters threw eggs and yogurt to the car of Greek Communist Party (KKE) MP, Liana Kaneli. Just minutes ago another group of protesters had stopped the MP and asked her not to vote for the Mid-Term Austerity programme. KKE has a clear party line to down-vote the Package.

Thousands of protesters have already gathered outside the Parliament. People arrived this morning also from other parts of Greece, like Thessaloniki and Volos. Later, labour unions are going to join the crowds on the second day of the general strike that paralyzes the country.

Inside the Parliament the debate on the crucial vote started at 10 a.m. The voting will take place at 2 pm, and the Speaker of the Parliament will call the names of the deputies. 151 votes are needed for the Package to be adopted. Read also our article “Horrified” Lawmakers to Vote for the Austerity Package, after all?

This morning, Syntagma Square was resembling a Battle Field after the heavy riots and clashes of Tuesday. Scattered on the streets around the Square and the Parliament are  pieces of marble, cobblestones, wood and sticks, burnt garbage bins. The smell of tear gas still lays heavy. The incidents lasted until deep in the night. 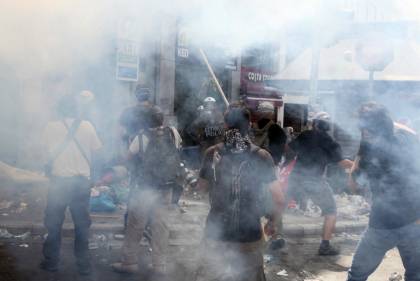 Greek media report of more than 350 injured people, the majority of them with breathing problems due to extensive use of tear gas. 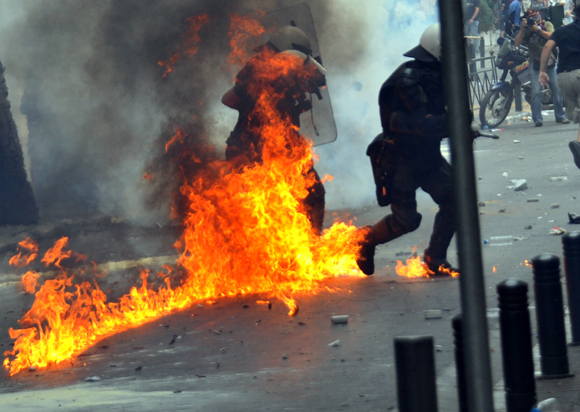 In case there is technical problem, please, <refresh> and wait for a couple of seconds or even minutes. The Link has occasionally but rare problems that last just a couple of minutes, at the most.
LIVE STREAMING: Γενική Απεργία ενάντια στο… by News247

11:35
Strong police forces around Syntagma Square and the Parliament. Reports of 5,000 men. 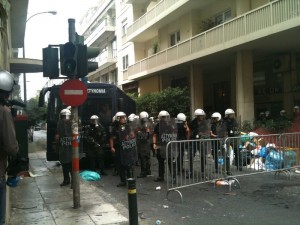 Things seem to be calm for the time being, as thousands protesters keep flocking outside the Parliament. 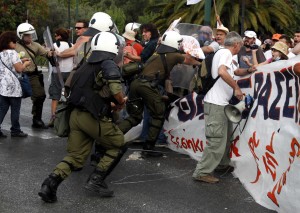 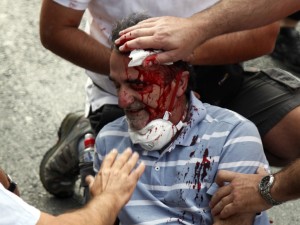 Tension outiside the Parliament – Protesters throw bottles of water to riot policemen. Police fires tear gas ( I wonder, what’s the cost of this extensive use of tear gas… )

Inside the Parliament the debate continues, the majority of ‘rebelling’ PASOK-deputies declared that they have objections towards the Mid-Term Package, but that they will vote for it.

13:42 VOTE
One deputy from main-opposition centre-right party Nea Dimokratia declares that she will vote FOR the Austerity Package; she will be expelled from the party or she will resign and be independent deputy

PASOK MPs Kouloumblis and Athanasiadis who had objections to Package, did not declare whether they will vote YES or NO, during their speeches.

13:46
Clouds of tear gas otuside the parliament. Protesters disapprove with boos. A group of protesters tried to come close to the iron-plexiglass fence.
video 1 by News247

Irony! this government banned the smoking for harming people’s health!

13:56
Riot police and a group of protesters exchange fists and kicks outside the parliament. Clashes body-to-body.
One protester injured, his friends carry him to the safety of the Metro station.
Tear gas and stun grenades.
many protesters have moved to the lower part of Syntagma sq, some meters away from the Parliament building.

14:15
Unbelievable scenes outside the parliament. Police heavily fires tears gas and smoke chemicals. Arrests one protester.
Anothe rprotester injured lays at the stairs of the Syntagma Metro
200 people sought shelter inside the Metro Syntagma station , most of them have breathing problems.

14:25
Voting start is being delayed – most probably to start at 3 pm , still 2,5 leaders of politicla parties to speak.

Many protesters injured at Syntagma Sq that turned into a “Battle Field” again.

Only two MPs (from Greek Communist Party & the Left Syriza) condemn openly the police behaviour and the tear gas outside the parliament. During the Mid-Term debate, they asked the Minister in charge and the Prime Minister to intervene and ease the tension.

14:39
Clashes continue , Police tries to push protesters away from the parliament building. Extensive use of tear gas and chemicals.
Many people seek shelter in the Metro Station (not the best solution though)

Greek depities try to “solve” the economic problems of Greece? No wonder many blame them that they have lost contact to the citizens.

14:58
While Finance Minister Ev. Venizelos speaks of ‘simple and guileless citizens that need to be protected’, a real battle is taking place outside the Parliament.

“simple and guileless”????? Meaning those on the streets have guile??? I’ll have to say that to my protesting hairdresser….
Επεισόδια και φωτιά by News247

“Indignant” Greeks call proetesters per loudspeakers to stay outside the Palriament and on the square.

PM Papandreou: The Mid-Term Programme is not the target but a difficult and necessary station so we can be able to change the country.”

“We definetely must avoid default”.

“It is Greece of lawlessness” (!!!!!!!) He speaks as if it’s the very first time he is active politician here (*shaking my head*)

15:27
While PM seeks ‘consensus’ and ‘give Greece a historical chance” the absolute chaos rules outside the Parliament.

Policemen pick up stones and throw them to protesters.

then the voting will start, I assume

15:33
many complains about police’s behaviour towards journalists and citizens. 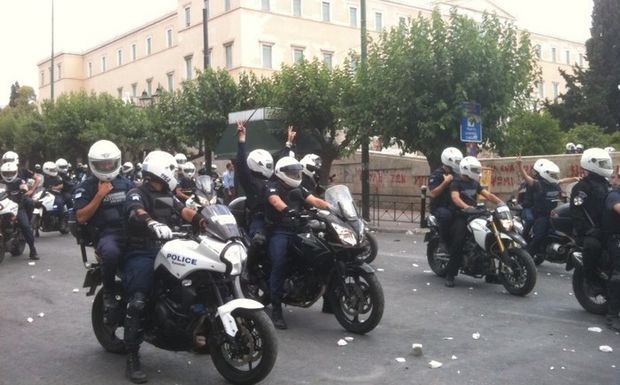 Policeman with Victory sign? it is a fooball mtach going on Syntgama? a war maybe? a winners’ parade? Exclusive picture from news247.gr with the caption “provocative gesture from the police”

15:40
Deputies names will be called – Deputies will have to raise hand and say loud YES or NO

15:45
so far big surprises in voting – PASOK deputies say YES all the other political parties NO – Except ONE PASOK DEPUTY VOTED NO

At the same time police is firing tear gas with an unbelievable zeal to protesters being trapped on Syntgama Sq. They desperately try to escape to side streets.

It’s so tragic what going on… so tragic, ‘raping’ the will of people

Horrible fighting outside the parliament

15:56
PASOK MP Athanasiadis who was claiming all these days to vote No, voted YEESSS, and held a short speech, telling he got convinced about the necessity of the Mid-Term

15:59
from the so-called ‘rebelling’ PASOK deputies only one voted NO – PASOK has 155 seats in Parlimanet, needs 151 to pass the Mid-Term Package. Got also one more vote from ND-deputy

16:05
King George Hotel right at Syntagma Sq has been evacuated

waiting for the official results….

the package of 28 billion euro in wages, social allowances and pension cuts and tax hikes to everything except breathing and <hmhm> has technically passed.

This will secure the 5th tranche and pave the way for another H-U-G-E bailout of appr. 100 billion euros that Greek swill have to pay back.

I declare officially “I am BROKE” and have nothing to give!

16:17
Kouroumblis, the PASOK deputy who voted NO, has been expelled from the party in express procedures.

16:42
The fight continues outside the Parliament. The use of tear gas has hit records! People at Syntagma cannot even talk to each other from the stinky and breathtaking air.

There are reports of 300 people trapped in the #Syntagma metro stations. A provisional First Aid clinic has been set up there.

The chairman of the Pharmasists’ Association went to Syntagma and asked the police to stop firing tear gas and other chemicals.

Report has it that a polciman threw a stun grenade into a running crowd.

“Indignant” Greeks call people per loudspeakers to stay and not leave.

People still try to seek shelter in the Metro Station . The air inside is thick . People call police not to fire tear gas in the Sq because tthe gas enters the metro station.

Tear gas and stones… and the long time austerity adopted. 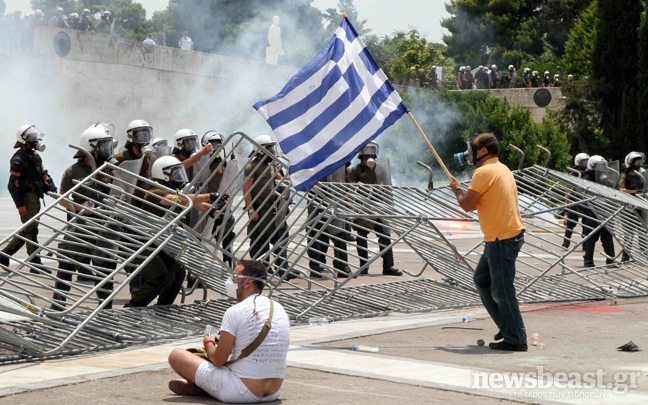 Complains of extensive use of violence by police, provoked or not provoked, no difference if protesters 15 or 65 (skaitv.gr)

17:38
The situation is out of control at Syntagma sq.
An ads banner was set on fire.
Black smoke and heavy tear gas clouds. Molotov fire bombs and stones from Hoodies.
Still clashes between protesters and police.

Athens downtown, where democracy was born, is being covered by tear gas.

I wonder where is the Minister for the Citizens’ Protection…..

A fire broke in the building of Post Office near Syntgam Sq. The firebrigades extinguished the fire.

Doctor have been appealing for oxygene at the Mestro Station #Syntagma where many people sought shelter.

There are reports of police throwing chemical in the metro station, reports of journalists injured by riot police, police on bikes chasing people through the streets of Plaka.

A photo Gallery from todays incidents in Le Monde

Situation is out of control.

“Indignant” Greeks see a police plan behind the riots/clashes to evacuate the Syntaga Sq from them. Many tents of their camp were burnt.

Private and public sector labour unions GSEE and ADEDY are meeting at Klfthmonos Sq near Syntagma for their planned anti-austerity protest.

Athanasiadis, the PASOk deputy who was objecting the Austerity package, but at the end voted YES, has been attacked by protesters, is slightly injured but still walking. Reportedly injured with a ‘sharp item’. Protesters even threw water on him.

Dimitris Trimis, journalist and member of Journos Trade Union, was beaten by riot police. he is in the hospital, slightly injured in the hand.

A group of normal citizens, told ALTER TV, that they were beaten by motor-bikes policemen, while they were eating at a restaurant in Monastiraki. One man that called the tv network was saying that the policemen entered the restaurant with clubs and started beating people. The rest of the group was shouting and confirning this on the phone. They said, they have the beating on mobile video. The said also that an old man was beaten by police.

Another woman, an office owner, called the same network and said, that the police threw tear gas and chemicals into a cafe in a passage at Ermou street. She complains that the attack was against normal citizens and that two people suffer from respiratory problems. She asked for help on the phone.

19:15
Wise words:
@rebeldog_ath rebel dog
“Yes Greece is not alone, but I am afraid that means that we are the trailer for the upcoming movie in a political theater near you”.