“Breath-Taking” Athens: The Day After with Shocking Videos

“Orders! They had orders!” Mina is very upset on the phone this morning. “They had orders to destroy the peaceful protests!” Mina is a middle aged friend, who calls me early in the morning to discuss Wednesday’s incidents. Mina, as the majority of the Greeks are totally shocked about the tones of tear gas thrown in downtown Athens even in the metro station, the excessive use of police violence, the shocking video footage showing police throwing flash grenades in tourists’ restaurants.

People sit in cafes next to Athens Cathedral; police squad comes with bikes; some throw water bottles; police answers with tear gas and falsh genades; people swear and condemn them

“They tried to stop us, but they won’t”, Mina tells me in one breath. “We’re definitely going to the protest this evening, it’s our democratic right!”.

Mina went with husband and her 16 years old twin boys on Syntagma Sq on Tuesday. The family stood there for two hours, with tears in their eyes due to tear gas. “I want to show my children that you have to speak out, not just to take passively everything”, she stresses, as her voice get louder with anger.

Mina is just one of the millions of Greeks who condemn Wednesday’s incidents as ‘brutal suppression of the democratic right to protest’.

“They destroyed everything so people get scared and won’t join the protests” says Manolis, 64, the kiosk man in my neighborhood. “They had a plan, they are afraid of the people”. 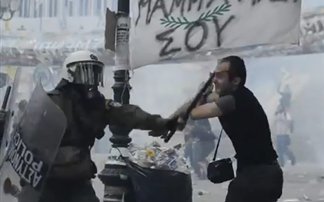 The impact of the Mid-Term Austerity Programme adopted with 155 votes at the Parliament is not on the agenda this morning. It’s the police behaviour, the role of possible agents provocateurs, the image Greece sends to tourists.

“Sad, I am so sad, about what happens with my country” says Aleka, another friend. “There is no democracy anymore, that’s a socialist junta”.

Dimitris Messinis, chief photographer in international news agency said in state TV NET, “I am speechless! I have covered many war zones, but I have never seen such a thing. There is no excuse for this excessive use of tear gas. I don’t know what interests were served”.

This morning the city leaks its wounds. Syntagma Square looks like a battle field. 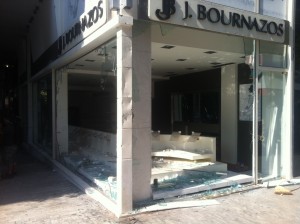 People walk around with masks then the air is still polluted. 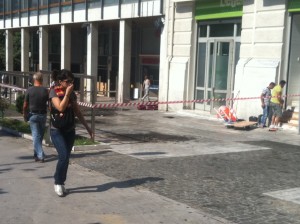 “I apologize in front of the citizens. That’s a Shame!” Spokesman of Greek Policemen Association told private radio “Real FM” this morning.

On Wednesday, Brussels and the Greek government welcomed the adoption of the Mid-Term Austerity with a relieving deep breath. Thousands of Greeks in Athens almost died of suffocation.