A lawsuit was filed on Friday morning against the Greek Police EL.AS by Alexis Tsipras, leader of the of the left-wing political party SYRIZA with 9 seats in the Greek Parliament. Tsipras submitted to the prosecutor of the Supreme Court photographs and 38 video footage and eye witnesses testimonies documenting the excessive use of violence and tear gas during the protests on Tueseday and Wednesday. He also asked clarification about the chemicals that were used against the protesters, some of them apparently expired.

Alexis Tsipras asks also investigation on possible criminal liability as the material used against the demonstrators is hazardous to public health. “Chemicals are banned by international conventions and are dangerous to human life,” Tsipras said after the file submission.

Sharply condemning the incidents on the two days, Tsipras stressed:  “We came here today with the hope that some troubled institutions in our democracy still function properly. In the hope that justice will rise to the occasion and will oversee, will ensure democratic legitimacy. Because what occurred the previous day in central Athens is a blatant violation of democratic legitimacy. ” 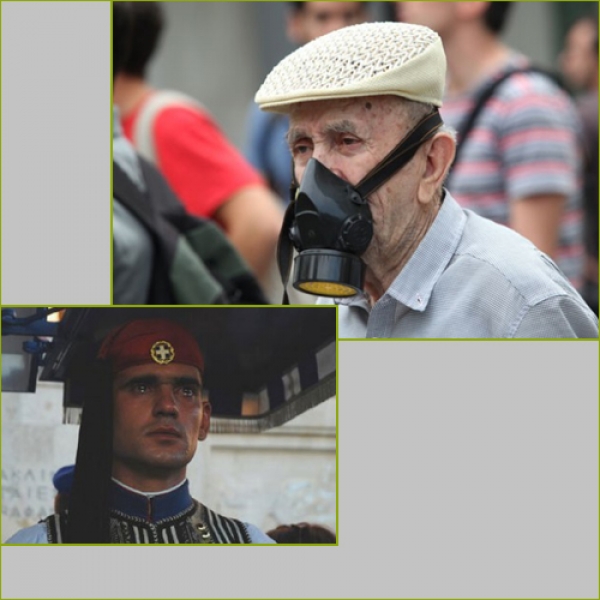 29/06/11 Old man with gas mask in front of the Parliament – Monument Guard in Tears due to Chemicals (www.dete.gr)

The intervention of the prosecutor of the Supreme Court on the use of chemicals was also requested by the Medical Association of Athens. Deputy Chairman of MAA, Giorgos Patoulis, told Greek media that they have already sent five tear gas bottles and sent them to State General Laboratory for chemical analysis and the damage they can cause on human health. MAA have also asked SC prosecutor to prohibit the use of expired tear gas and other chemicals.

A lawsuit was also filed by the President of the Attica Prefecture Pharmasists’ Association Kostas Lourantos.

The excessive use of tear gas triggered a national outcry, a heated debate in Greek Parliament, a criticism averting tactic by the government and the police but a sharp criticism also by policemen associations.