A group of 50 border guards and special guards of the Greek Police (ELAS) climbed to Lycabettus Hill in downtonw Athens at 5:30 Monday morning and hung a huge banner to protest their wages cuts.  The banner, 25 meter long and 5 meter wide, reads: “ELAS mourns: Pay Day – Mourning Day”.  In the context of austerity measures, Greek policemen saw sharp cuts in their wages in the last month, some even complained that it was just 500 euro that landed in their pockets.

“This must stop, the government and the state should listen to our problems,” said President of Professional Guardians of Attica, Basil Doumas and underlined   that their wages do not fit to their  working conditions. “The most impressive the austerity measures, the most impressive will be our protest  actions” Doumas warned. 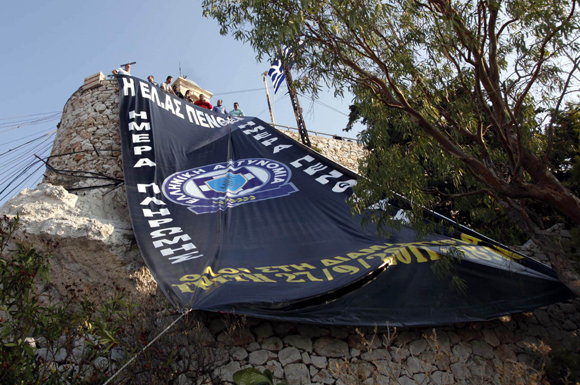 The special guards will remove the banner at noon and will demonstrate tomorrow Tuesday at 6 pm in front of the Parliament. They are determined to continue their protests.

During the protest there was tension among cameramen covering the protest. One cameraman from a private television channel was attacked by members of the Union of Private TV Technical personnel of Attica. The man was initially verbally attacked and then the situation went out of control and he got injuries in the head. Reason? Unknown so far….