While Greek members of the Parliament gathered to vote for the unpopular property tax, hundreds have gathered outside to protest the voting and the new austerity package that comes as a storm over their heads. “Indignant” Greeks and members of the civic “I Don’t Pay” movement have urged citizens to join the protest. Strong riot police forces have took place around the Parliament to hinder protesters coming close.

18: 30 (6.30 pm) The protests started with a group of special guards from the Greek Police (ELAS) who raised banners saying: “We are illegal immigrants in our own country”. Protesting police officers are surrounded by … working riot policemen!

19:17 The voting in parliament will start soon. Roll call vote. It will be decided upon the majority of the present deputies and not the absolute majority (151 YES votes in a 300-seat parliament.

The meeting between Greek PM George Papandreou and German chancellor Angela Merkel is scheduled to start at 9 pm Greek time.

There is delay in the voting. Rumors claim that 3 PASOK deputies intend to vote against the property tax bill.

19:40 Major Streets are closed to traffic in downtown Athens

19:42 Debate in the Parliament started!

Citizens o﻿f all ages and social classes flock outside the Parliament. With trillers, banners and flags.

Finance Minister Evangelos Venizelos said Hotels are exempted form the property tax. He dismissed claims that property owners who lease to state institutions won’t pay the tax … because the state is exempted from it.

Tension Outside the Parliament  as protesters tried to break the riot police chain at Vass Sofias Str. Protesters booed riot police. A couple of water bottles were hurled against them.

Unconfirmed reports claim a policeman was slightly injured by a hurled stone.

19: 58 Voting started at the Parliament

The Property Tax will come via the electricity bills. Those who will not pay the tax will have the electricity cut!!! Goosebumps! Shivering Blackmail! The property tax will cost several hundreds or thousand euros to property owners. For the rest of their lives in deep recession!

There are some reports of police to have fired tear gas against protesters.

20:46 All Quite outside the Parliament – Keeping an eye on possible ‘incidents’ when deputies will leave the building.

I may have a luxury beer – the worst Dutch is sold as the most expensive in Greece: €1,40 in super-market. HA! I ‘ll drink it drop by drop…

Syntagma Sq a couple of minutes ago @mkhalili 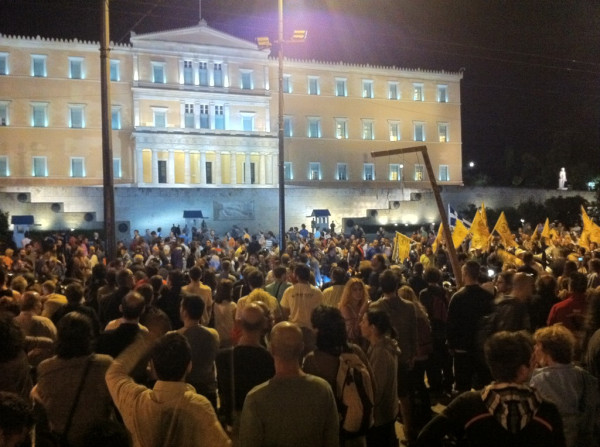 21:19  Papandreou – Merkel join press conference concluded. Merkel said, she wants a strong Greece within the eurozone [preferably without …Greeks!]. She also said that Greeks pay a high price for the changes in their country [Greeks pay a lot but see no change]. The two leaders left for a join dinner…

21:22 All quite outside the Parliament!

There are reports that police made etxensive use of force, practically for no reason.

Protesters report of a man who collapsed, of tear gas round Syntagma Sq and deployment of more riot squads.

There are reports of extensive use of tear gas as protetsres and riot police play cat & mouse… better say: mouse & cat

Half an hour ago protesters thought they saw an MP outside the Pallas Theater and gathered around the man. Strong police forces rushed there, the actors interrupted the play.

There is  stone-tear gas ‘war’ going on …

It seems the night will be long in downtown Athens as clashes continue between protesters and riot police.

22:34 Riot police has “cleared” the area outside the parliament and the Syntagma sq from protesters and has pushed them towards Ermou str. – Police opened major roads of downtown Athen to traffic.

Thank you for reading “Keep Talking, Greece”! Have a great night!