Members of GENOP-DEH union at the electricity company occupied last night the premises where the bills are been printing in order to prohibit the issue of 190.000 bills containing the emergency property tax to households. However the occupation seems to have failed its target as the DEH management found alternative ways to print the odious bills. Furthermore the management urged the union members to withdraw, threatening with legal measures.

The occupation started on Wednesday afternoon when a group of union members entered the building and interrupted the work of employees at the computerisation department. until now no bill has been issued. GENOP-DEH President told Greek media, “the union will do anything to hinder that poor citizens will have the electricity cut”. The Finance Ministry in cooperation with the electricity company DEH – or other private suppliers – will cut the electricity if property owners will not pay the emergency property tax.

UPDATE: The occupation has been ended. The Union said that it will hinder the electricity cuts for those who can’t pay the property tax.

The bills containing the emergency property tax will have a separate, additional  section showing the tax amount like in the picture below: 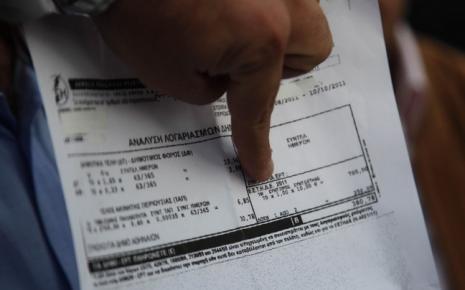 In the example bill photocopied by the GENOP-DEH union, for an apartment 70 sqm, in Athens municipality with value zone 2,700 EUR and ‘construction age’ factor 1, the property owner will have to pay 700 EUR in two installments of €350. 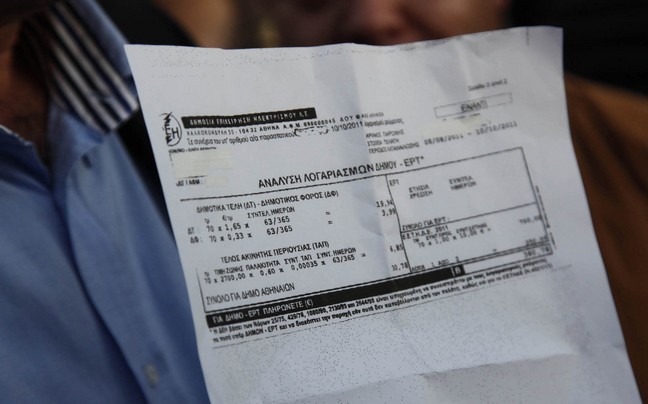 If you pay the DEH-bill via a bank account, the property tax will be paid automatically. You have to check whether there is enough money on the account and/or add the amount needed, one day before the payment expires. I was told by the bank, that to be sure the tax has been paid, you should double check one day after the money has been withdrawn from your account.