The new Greek government is here and was sworn in at the Presidential Mansion in Athens on Friday afternoon. The new government consists of three political parties: PASOK (Socialists), Nea Dimocratia (COnservatives) and LAOS (Far-Right). Head of the new government is  Lucas Papademos, banker and ex Vice President of ECB. A non-elected PM, after George Papandreou was forced to step down when his own MPs uproared against his decision on a referendum on the loan-agreement with Greece’s lenders.

Deputy PM: Venizelos and Pangalos ( as in former gov’t)

In the transitional  ‘national unity government’ that consists of 48 people: PASOK (Socialists) has 38 officials,  Nea Dimocratia (Conservative) 6 and LAOS (far-right) 4. 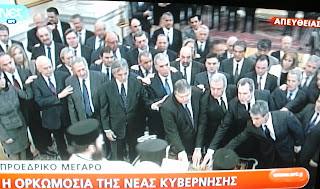 Six officials from the old government are out. Among them Panos Beglitis (Defence) who triggered an uproar for replacing in a surprise move the whole leadership of the Greek Armed Forces, just hours when it was clear the power of the old government was falling apart.

Next Moday or Tuesday the new governmental policies will be announced at the Parliament targeting the vote of confidence. The 3-part government has 249 seats in the parliament. PASOK 153, ND 85, LAOS 11.

– In some ministries there are representatives of all three parties, like Defence: Minister ND, two alternate (PASOK, LAOS), deputy Min (PASOK).

– Dimitris Avramopoulos resigned from his seat at the Parliament as ND insisted of not providing the new gov’t with elected members of the parliament.

– Rumors: The oath was delayed because the ‘papyrous’ where the ministers sign were not printed  as by 2 pm; the oath was postponed for 4 pm.

-Claims: Papademos was adding and deleting names from the government list until 3 a.m. last night