Homeless in Freezing Athens (videos) – Any Blankets to Spare?

While some of us enjoy a heated home or the magic of the fire place, many people spend their days and icy cold nights on the streets. Several blankets and cartons give shelter to these men and women, those young and old who for some reason made the hard pavements their home. While in the past, the homeless were considered just the society outcasts the profile of the homeless has change. The economic crisis violently kicked men, women and even families out of their homes, Men and women who experience the nightmare of unemployment, the sharp drop of their income and became unable to maintain four walls and a ceiling over their head. 20,000 to 25,000 people are estimated by non-governmental organizations to live on the streets of Greece.

The reporters of news portal
Άστεγοι Αθήνα Κλαυθμώνος από News247“>News247.gr went on the streets of  the Greek capital the previous nights and with their cameras captured the moments of homeless living in freezing Athens. When temperatures dropped below zero.

The Athens Municipality has opened several public facilities to give shelter to homeless. However quite a number of them prefer to stay on the streets in order not to miss the ‘nest’ they have reserved on the street or a park bench.

On icy cold nights, some homeless seek shelter in public hospitals and NGO’s appeal to hospital personnel  to keep these people inside as their health is in danger due to living on the streets.
Video: Panepistimou Avenue

Units from the social department of Athens municipality and volunteers walk the streets and try to locate homeless. Offer them a cup of a hot drink and soup, a blanket, a sleeping bag.

If you have blankets, sleeping bags, winter clothes and even food to donate you can call 2105246515 and 2103410462 (Athens Municipality numbers). You can also call these numbers if you locate a homeless person. 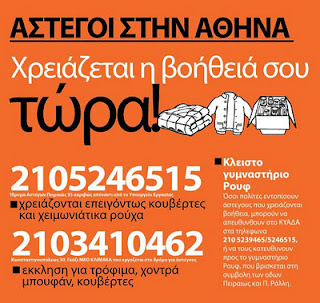