A woman, 80, lost her life last night in Ilia, when she was trying to get out of her home and escape tons of rushing water. The woman had a tragic death. She was found drown, trapped at the wire fence of her house. Due to torrential rains that fell in the Ilia prefecture of  south-western  Pelopponnes,  four streams had overflooded the area allowing an amazing volume of water to rush through the village. 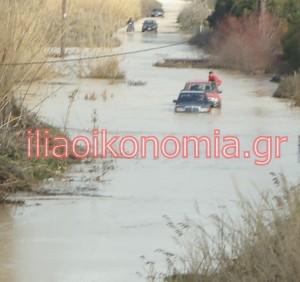 The storm broke out at midnight flooding streets, houses, shops  and agricultural fields, sweeping away animals and cars. Familes with children, drivers in their cars, patients in hospitals, nuns in monasteries, they were all threatened by the torrential rains flooded the area. As rescue efforts are under way, desperate citizens call the fire brigades and the police to send rescue teams and untrap them from the flooded houses.

Greek media report that in some houses the water has rose up to 70 centimeters. 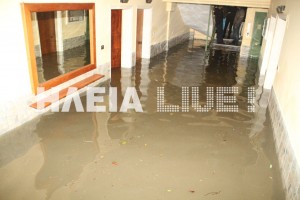 The public hospital of Pyrgos is beeing evacuated  after the heavy rain flooded the two basements causing power cut.

There is a big rescue effort with the participation of Puma helicopters, firefighters and policemen due to landslides in the Lanthi village. There are reports of people trapped in their homes and rescue efforts continue. Several dozens children and adults were threatened to drawn in a Roma settlement.

The premises of the railway station in Pyrgos has turned into a big lake.

Local media like Ilialive.gr  report of a last-minute rescue of a bed-ridden woman who was almost covered by the water. In another rescue case, a Puma helicopter managed to rescue a 78-year old woman.

The state of emergency has been declared for the Municipality of Pyrgos and the Ancient Olympia.

Meteorologists say that this has been the biggest storm that hit the area in the last five years.

Great thanks to the reporters of local  media ilialive.gr  and  iliaoikonomia.gr  for the continous flow of information, the updates, the footage and images.