Angry protesters set a German flag on fire outside the Greek Parliament. They also attempted to burn another flag with a Swastika. Riot police intervened and fired tear gas to disperse the angry crowd that was trying to come dangerously close to the Greek Parliament building.
Video

A group of workers and pensioners and young ones tried to occupy the stairs of the parliament and the area of Unknown Soldier monument right in front of it. Riot police fired tear gas to disperse the crowd and clashed with the demonstrators. Unconfirmed reports speak of injured protesters. 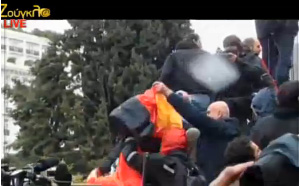 Protesters chanted slogans like “Resign! Resign!”, “No Cuts, No Lay-Offs!”, “Let’s us enter the Parliament and show what democracy is!”.

Public and private sector unions ADEDY and GSEE had called for a 24-strike and mass protests outside the Parliament today at Syntagma Square in downtown Athens.

Protests are taking place in other cities as well.

In Iraklio, Crete, protesters hurled stones against banks and broke some windows of the Justice building. (newsit)

The founder of child charity “Ark of the World” priest Antonios Papanikolaou, his wife and …