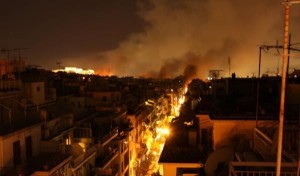 The extensive use of tear gas and the arson at shops and banks have created an extraordinarily unpleasant atmosphere in downtown Athens.

In ANT1 TV, a fireman said that also some firemen have been hit by the rioters.

ANT1 TV reported that there are more than 100 injured policemen, two of them seriously wounded. The policemen were most probably injured during clashes with rioters.