Athens: Rioters Asked Money in Order Not to Burn Down Shops

February 13, 2012 Society Comments Off on Athens: Rioters Asked Money in Order Not to Burn Down Shops 112 Views

Movie theater ASTY in downtown Athens was one of the facilities that came under attack by rioters and vandals. George Stergiakis’s testimony to news portal NewsIt is shocking: “The hoodies asked money from me in order not to burn down the underground cinema.” The incident took place around 6.30 in the afternoon. A group of people “wearing hoods came down and asked money from us, if we didn’t want them to destroy the theater. They asked money from other shop owners as well whose facilities were open. Of course, the police was nowhere around, nobody came to our help,” Stergiakis said, noting that the group consisted of 4-5 people wearing hoods and that they were all Greeks. 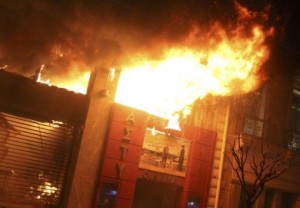 Many shop owners who rushed in downtown Athens to protect their shops from arson, vandalism and looting on Sunday complained to Greek media about the absence of the police.

In oprivate Mega TV, a shop onwer said that he and his brother were trying to get rid of the looters putting their lives in danger. The looters were armed with iron sticks. (in Mega video 00:50 min)

More than 170 shops, banks and cafes has suffered serious damage during Sunday’s riots, 45 of them were totally burned down. Dozens of people lost their work places, amid a severe economic crisis and recession.