“I am Greek and Wanna Go Home” is the title of a video that goes around the internet. With reference to the stolen marbles of Acropolis, music-composer and photographer Ares Kalogeropoulos created a visual appeal for the return of the priceless marbles currently in the British Museum in London. “You can steal a statue, but you can not steal my identity” the the slogan. 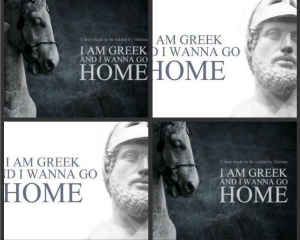 The Parthenon Marbles  forming a part of the collection known as the Elgin Marbles  are a collection of classical Greek marble sculptures (mostly by Phidias and his pupils), inscriptions and architectural members that originally were part of the Parthenon and other buildings on the Acropolis of Athens. Thomas Bruce, 7th Earl of Elgin, the British ambassador to the Ottoman Empire from 1799–1803, obtained a controversial permit from the Ottoman authorities to remove pieces from the Acropolis

The purpose of this video action is the return of Greek antiquities illegally detained abroad. In the video including Pericles appears with the message “I’m Greek and I wanna go home.”

“The touching message goes around the internet and reminds us how proud we are of our culture.” (mediagate.gr)

PS To tell you the truth, when I read the title “Pericles: I am Greek and I wanna go home” I thought, it was a hint that democracy should finally return to Greece :). Pericles, an Athenian statesman, fostered democracy to such extreme that his enemie blames him for populism…