The masks have fallen. German Finance Minister Wolfgang Schaeuble made a shocking revelation. He admitted he openly spoke with his Greek counterpart Evangelos Venizelos about a possible euro exit of the debt-ridden country.

UK’s Daily Telegraph describes Schaueble’s comments as “provocative”. So far there has been no comment from the Greek side.

The regular updates [on PSI] coincided with provocative comments from Germany’s finance minister, Wolfgang Schaeuble, who said he had discussed with Greece’s finance minister Evangelos Venizelos whether it would be better for the country to leave the euro.

Speaking at the European University Institute in Italy, Mr Schaeuble said he had discussed the issue “very openly” with Mr Venizelos.

“Maybe you could say it was the wrong decision for Greece to join the common European currency,” Mr Schaeuble said. “Greece has failed for a long time to deliver what is needed to be in a common currency.” (Telegraph)

Wolfgang Schaeuble had a difficult time, while at the European University Institute in Florence, where he gave a lecture on Europe’s future.  He became the target of protesting students. Some 60 PhD researchers and university workers confronted Schaeuble wearing pigs masks and holding large banners reading “We Are All P.I.I.G.S”. As the students did not allow only but a few quite moments, before, during and after Schaeuble’s speech, he reportedly got angry and said “Everybody knows the problem  is on Greece and the Greeks and not on abroad”. 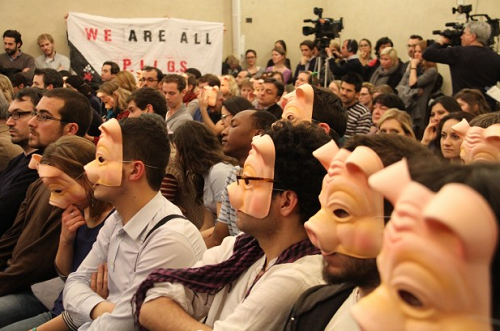 German Finance Minister vs. PIIGS: ‘Europe is not for sale!’

German Finance Minister Wolfgang Schäuble was treated to an indignant welcome today as he arrived at the European University Institute in Florence to give a lecture on Europe’s future. Organized through the Collettivo Prezzemolo, some 60 PhD researchers and university workers confronted Schäuble — one of the key architects of the punitive austerity measures being imposed on Portugal, Italy, Ireland, Greece and Spain — before, during and after his speech.

After plastering the university with hundreds of posters denouncing the Orwellian rhetoric, inhumane policies and undemocratic posturing of Schäuble and the powerful private banks he serves, the protesters unfurled four large banners reading “Europe is not for sale!”, “We are all P.I.I.G.S.!”, “End austerity!”, and “Europe is not sudoku!” — the latter a reference to Schäuble’s puzzling choice to play a game of sudoku during the latest Greek bailout talks. (Further Reading and more pictures Roarmag.org)