While the parade in Athens was relatively quite due to highest security measures, people’s outrage against the government austerity policies could be tamed only with the use of tear gas. The protesters were armed with the usual “ammunition”: eggs, yogurt, coffee, water bottles and bitter oranges that grow wild on the streets and heavy insults against the politicians. 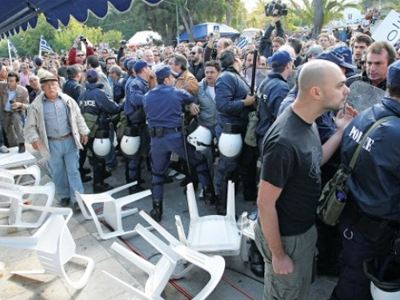 In Patras, western Peloponnese, a group of people clashed with riot police before the parade even started. The police fired tear gas even inside shops. Visitors in several cafes flew in panic.

The parade started half an hour later than scheduled, the dignitaries had flown the area seeking safety.  Patras resident told reporters, politicians should dare stay and “get some tomatoes”.

Woman: “What kind of parade is this? Where are the dignitaries? they should come and get some tomatoes for all they’ve done to us. I am hungry. I have been left with a pension of 200 euros﻿. How can I survive witth this money?”

In Chania, Crete, protesters clashed with the police after a sound storm of anti-geovernment slogans. A woman fainted and was taken to the hospital due to excessiver use of tear gas.

In Iraklio, Crete, members of several civic movements broke into the area of the parade, the police fired tear gas, the parade was cancelled.

In Xanthi, NE Greece, dignitaries fled when protesters started to march after the parade. Before the parade protesters clashed with police, when the first attempted to march. 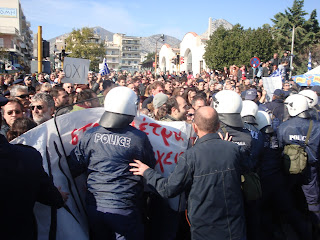 In Larisa, central Greece, students turned their heads away from the dfignitaries and some even hailed them with open hands (moutza). After the parade, protesters clashed with police, two people were detained.

In Rhodes, microphones were turned off in order to “silence” the insults, the booes and the slogans chanted by the people.

In Thessaloniki, 15 people were detained. the parade started later than scheduled due to protesters who chanted anti-government slogans.

In Chios, a group of protesters marched before the parade under the applaud by the people.

Tensions between police and protesters occurred also on the Ionian islands.

In Veria, police detained 32 protesters. Some of them were apparently carrying wooden clubs.

The list of protests during the parade is long….