US President Barack Obama had no idea, he could trigger a Greek-Turkish food “crisis”, when he expressed his enthusiasm over a tasteful bite of “Greek Baklava” – a sweet pastry full of nuts among the layers and soaked in syrup. Turks claim “Baklava” is Turkish and so is “simit” they say. Simitis a thin ring of bread coated with toasted sesame seeds. A quick snack that the Greeks call “Thessaloniki roll”. Alarmed by Obama’s “Greek Baklava”, our Turkish neighbours started a campaign and a petition to get an international patent for Simit. “We won’t allow Greeks to grab our simit,” İSTESOB Chairman Faik Yılmaz told Turkish daily Todays Zaman.

However a Simit does not equal a Thessaloniki Roll, which is is thinner and therefore more crispy than the Turkish. The difference is more than obvious, isn’t it?

Greek Thessaloniki Roll: hard in- and outside

So far there has been no reaction by the Greek side. Struggling to survive inside the heavy storm of economic crisis, Greeks apparently have other problems than to fight for a sesame coated bread roll.

Turkey launches action to get int’l patent for simit

The İstanbul Simit Tradesmen Chamber has launched a process to get an international patent for the number one Turkish street food, the simit, a ring of chewy bread coated with toasted sesame seeds.

İstanbul Simit Tradesmen Chamber Chairman Zeki Sami Özdemir on Tuesday filed a petition with the İstanbul Union of Craftsmen and Artisans’ Chambers (İSTESOB) and called on the chamber to take action and the necessary steps to protect Turkey’s national food, the simit.

The petition came after US President Barack Obama said — at a ceremony of Greeks held on March 25 in the White House — he admired the taste of “Greek baklava,” a sweet pastry, which has been regarded by the Turks and the Greeks as their traditional dessert for centuries.

“We will hold on to our simit and won’t allow Greeks to grab our simit,” İSTESOB Chairman Faik Yılmaz said, adding that Greeks have been presenting Turkish traditional foods as their own for centuries. He emphasized that Turkish baklava has its origins in Central Asia.

The simit is one of the most widely consumed food products in Turkey. Foreigners now know it as the national food of Turks. It sometimes serves as breakfast and even lunch for both the rich and the poor. That is why simit sales, instead of dropping during an economic crisis, increase. Economic problems in Turkey have not caused the sale of simit and accompanying cups of tea to decrease. (Todays Zaman)

OF coourse, apart from the origin question, one should wonder about the taste. In case someone has doubts, we could ask Hollywood star Pamela Anderson who had the chance to taste a delicious Greek Sesame Roll, when she visited Athens in Sept 2010. 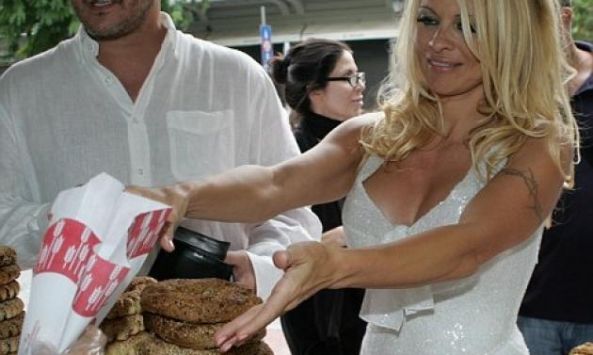 PS Under the current circumstances the Turkish simit-monologue reminds me of a …hole in the water. 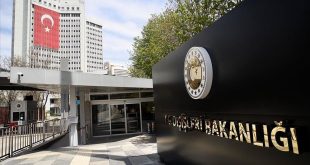 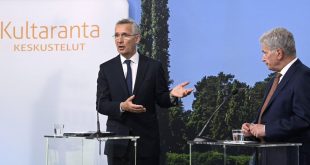