I slowly start to believe that European folks will most likely experience turbulent times, should French presidential candidate Francois Hollande wins the elections. He already started to criticize the policies of outgoing Sarkozy and attack German Chancellor Angela Merkel. On her side, the ruler over the European fates does not miss the chance to hit back and defend her rigorous plans for the shake of Euro-survival – at all costs. 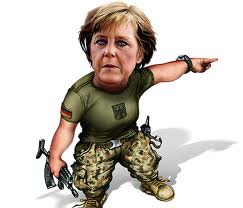 As there are not picts yet of Merkel-Hollande we post German Chancellor in fighting mood.

Sarkozy-supporter Angela Merkel attacked Hollande in the middle of the presidential election and warned him that the EU’s new Fiscal Compact was not up for discussion.

Chancellor Angela Merkel has attacked French presidential candidate François Hollande in the middle of France’s presidential election, warning him that the EU’s new Fiscal Compact was not up for discussion.

Merkel and fellow conservative French President Nicolas Sarkozy have a close political relationship and were leading powers in agreeing on the strict fiscal pact to help troubled parts of the eurozone.

The compact was signed in March by 25 of the 27 EU member states, and Merkel told German media organisation WAZ on Thursday that even if Socialist Party leader Hollande wins the election, the pact was “not up for negotiation.”

Merkel said that although growth was important for Europe, it was not as vital as solid financial security. She admitted she was concerned that if Hollande won the election, other countries would withdraw their signatures.

Hollande told French television on Thursday evening  that many of the EU member states were waiting for his party to be elected so changes could be made to the pact.

“Germany is not going to make the decisions for all of Europe,” he announced. “Lots of countries today are waiting for France’s decision, because we aren’t any old country in Europe, we’re a leading country in Europe,” he said, adding that what France does could considerably change how the EU handles the eurozone’s financial woes.

One of the pillars of Hollande’s campaign has been to call for the pact to be renegotiated and he has vowed to veto it if he considers that it contains insufficient measures for growth.

Merkel’s spokesman Steffen Seibert said on Friday “the federal government and the chancellor will work well and reliably” with whoever wins in France. “That is the nature of the particular French and German partnership and friendship,” he added. (local.de)

Indeed it is! Not only the political neture but the astrological as well. Only that this time, Cancer-Merkel will have to allow Leo-Hollande to dominate her lol

“In spite of their astrological different natures, there will be a strong bond between a Cancer and a Leo.
Cancer will often have to give way to the dominant Leo but Leo has a quality which makes Cancer’s moon shine more brightly.
A Leo needs appreciation and attention which Cancer is happy to give.
A crab and a lion can get on like a house on fire and because they’re so close to each other in the heavens, they may find that a little of each sign spillls into the other’s.
Things are best of all, though, when a loving Leo meets a captivating crab.They’ve got so much in common, it’s charming.

What will really make them both happy is that the fidelity factor will be fantastic, because Leo is a fixed and therefore faithful sign.

Cancerians like to be dominated and who better can do that than a strong-hearted Lion.”

Paraphrasing a bit the Cancer-Leo astrology match, we would say that “Cancer will cook on the EZ fiscals, and will try to clean the Euro Crisis mess, while Leo will be happy to see his EU kids smiling around him.” These new EU parents will form a family full with joy…
PS Let’s keep the astro-forecast in mind and see what will happen (:p)