Athens: “Jerusalem Post” Reporter Beaten As He Was Trying To Film Mob Attack

A reporter of  Israeli daily Jerusalem Post got injured by masked cultprits while he was trying to film a mob attack outside tha National Archaeological Museum in downtown Athens. Injured in the head and the chest, Shefler was rushed to a hospital for treatment. Shefler reported that the incident lasted some 15 minutes and that he was chased and beaten with sticks when he took out his camera. Shefler was in Athens for a report about extreme-right party Golden Dawn (Chrysi Avgi). 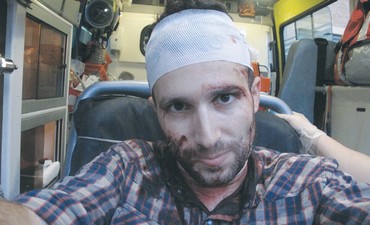 The incident began around 8 p.m. on June 6/2012 when a group of about 20 masked men wielding batons started beating refugees, migrants and homeless people in the middle of the street.

“Police said they were not sure who was behind the attack. Sources said the culprits were either anarchists associated with Syriza, a farleft party, who may have been cracking down on alleged drug dealers and junkies, many of who are migrants and refugees; or members of Golden Dawn, a neo-Nazi group, whose members are known to occasionally beat and stab foreigners.“The sad thing about the precarious situation here right now is that I cannot say with certainty whether my assailants were from the far Right or far Left, but it doesn’t matter,” he said.“In downtown Athens both often take the law into their own hands. When I saw the viciousness of the attack on people outside the museum using batons and sticks, I did my journalistic duty and snapped photos, and for that offense I was brutally beaten.”

The financial crisis has exacerbated already tense ties between citizens and migrants, leftists and rightists in Greece. Over the past several years neighborhoods such as Exarcheia have occasionally erupted in violence with clashes between various political factions, police and ethnic groups.” (JPost)

Gil Shefler wrote down his impressions from his Athens experience and a society living in economic crisis and social tensions.

“This country is going through a hard time and its citizens have my empathy, but authorities need to know incidents like these do not inspire confidence,” Shefler said. “Clearly, there is a problem when mob violence can take place in broad daylight in the center of the capital. More must be done to protect Greek citizens, migrants and refugees, tourists and journalists, from the wave of violence on the streets.”

The Athens Municipality did not respond to several press inquiries on Wednesday. A press officer said there was no response because its email service had stopped working.” (source: Jerusalem Post)

PS Recently I had received an e-mail about the assault of another foreign reporter – from Switzerland – at Omonia Square in downtown Athens while he was trying to take pictures. Less than one kilometer away from the National Museum. However as there was lack of some important information details I couldn’t post the news.