Masks have fallen with in a manner of  unprecedented boldness. German Chancellor Angela Merkel openly admitted that the austerity programme imposed on Greece was necessary just to set an example to the other euro zone countries. 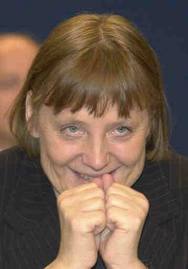 Here is the story from Deutsche Presse Agentur:

She stressed that a bailout sought by Spain for its banks was different from the bailouts for Greece.

“I find it correct that Spain made an application for the recapitalization of its banks, because the problems of its banks do not cover up any lack of macroeconomic reforms, but are the result of a real-estate bubble over the past decade,” said Merkel.

“There will be conditionality for Spain when the application arrives. It will require restructuring of the banks,” she said. (DPA)

Chancellor Angela Merkel’s intention to mete out exemplary punishment to Greece so as to dissuade other country’s from breaking the rules was initially reported by Italian daily Il Messaggero five days ago. Merkel getting ready to kiss a lab rat

PS As it doesn’t matter whether the austerity programme succeeds or not and it makes no difference whether Greece carries out the programme, I assume it does not matter either, whether the bailout loan would be paid back or not. It was jsut an experiment that failed…

Experiments with lab rats sometimes fail, especially when the lab rats prove unable to survive the contemptible attempts of the mad scientist….