Incidents of politically motivated violence seem to increase as the country heads to June 17 elections. According to Greek media information, on Tuesday night, two men with a pitbull on the leash approached the elections stand of Greek communist party KKE and without a reason they threw water and orange juice at the microphones chanting “Communists, you will die.”

People at the square of Agia Paraskevi suburb of North Athens, started to move away from the many election stands there. Giorgos Tsimpoukakis, KKE member of the city council from a left party approached the men demanding explanation for the attack.

Immediately, the men started beating him on the face and the head. The injured and bleeding man fell on the ground while the men fled. The victim was taken to the hospital.

Mayor of Agia Paraskevi, Vasilis Zorbas, who was eye-witness of the incident, told news portal NewsIt.gr, that the two men were from extreme-right Chrysi Avgi and that the city counselor was beaten most probably with an iron fist. 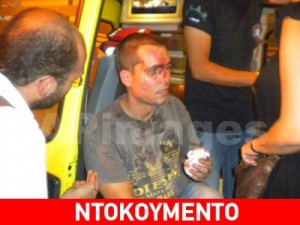 Also other eye-witnesses said that the men were carrying emblems of Chrysi Avgi (Golden Dawn).

The news portal cites information according to which the two men had previously destroyed the elections stand of left-wing SYRIZA.

In a statement issued Wednesday morning, KKE condemns the attack and speaks of “fascistic attack carried out by thugs.”