Doctors have forbidden Greek Prime Minister Antonis Samaras to travel after a serious surgery to repair retinal detachment. “His condition is improving, but he cannot travel either by plane, not by car nor train in order to avoid exposure to high pressure” said the doctor at a press conference on Sunday morning.

Samaras will be allowed to exit the hospital on Monday, however he will be subject to medical surveillance and movement limitations. Doctors have ordered ‘immobility’, like not walking and standing.

It will take some time “until the gasses that were infused to his eye will be absorbed” by Samaras’ body. 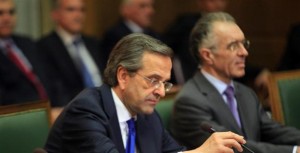 Vassilis Rapanos was urged to hospital on Friday with high fever, abdomen pain and exhaustion. His health condition has been stabilized and he is expected to exit the hospital on Monday or Tuesday.

PS EU Summit could take place in Athens. That would be a good opportunity to promote Greece abroad and boost tourism… 🙂