European Union leaders approved a 120 billion-euro ($149 billion) plan to promote growth in the 27-nation bloc that includes a capital boost for the European Investment Bank.

The government chiefs agreed on a 10 billion-euro capital increase for the EIB today as a centerpiece of the long-term growth plan, which includes infrastructure financing, tax-policy pledges and more focused use of EU funding. It also calls for project bonds and support of small and medium-sized businesses

The growth agenda is a sign of our unrelenting commitment,” EU President Herman Van Rompuysaid in a press conference in Brussels on the first day of a two-day summit. “It brings together all concrete measures that we will swiftly take.”

Van Rompuy said other elements of the growth-promoting strategy, such as those dealing with financial stability and the future of the euro, have not yet been finished.

The leaders will continue meeting tonight to discuss the long-term future of the EU and its 17-nation common currency. “We are making progress,” he said, adding that debate on short-term measures isn’t blocking the path to agreement. Leaders also continue to discuss an EU patent, he said.

German Chancellor Angela Merkel endorsed the growth plan before the meeting started, calling it “a good program, especially in terms of future-oriented investment and above all in terms of more job opportunities especially for young people.”

The Luxembourg-based EIB could use its capital infusion to increase its lending capacity by 60 billion euros and unlock 180 billion euros of additional investment, according to EU estimates. (Further reading Bloomberg) 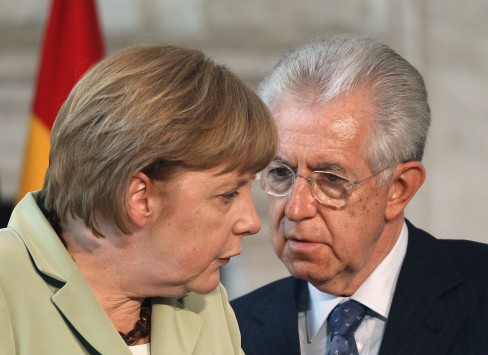 IT Monti to GERMerkel: Eurobonds or should we keep scoring?