Members of extreme-right party Chrysi Avgi (Golden Dawn) clashed with riot policeon over the transfer of 250-400 illegal immigrants to an army camp. The  incidents started on Thursday morning when police vehicles transported detained illegal immigrants to the army camp of the 6th Infantry Regiment near Corinth, in Northern Peloponnese. 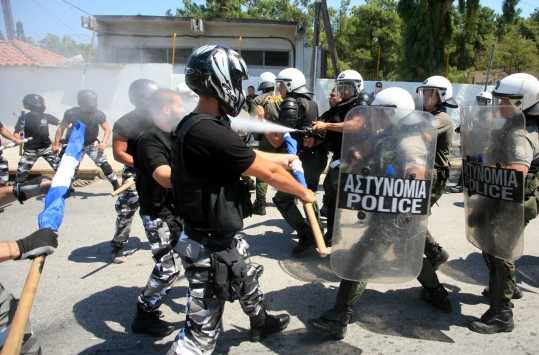 Residents of the area supported by members of Chrysi Avgi led by MP Eystathios Boukouras tried to prohibit the immigrants transfer and clashed with riot police forces, Greek media reported.

Police managed to transfer some 250 immigrants in the camp. The immigrants have been transferred there after being detained in several areas of downtown Athens. They are supposed to remain there, until authorities check their papers and deport them back to their home countries.

Outside the army camp

Transferring immigrants to army camps outside Greek capital Athens has often met with opposition of the locals.

In Corinth, the mayor and the city council consider to stop the garbage collection as “retaliation”. In the morning they cut the water supply to the  camp, also to the soldiers part. Apparently a prosecutor is investigating.

The Trade Association of the city also opposed the immigrants trasnfer and the Chairman of Corinth Chamber of Commerce said  that “it was a mistake to locate immigrants into an army camp”.

Chrysi Avgi issued also a statement, describing as a “criminal action” to convert facilities of the Greek Army into “tourism centres for illegal immigrants”.