Front page report “The coup d’état that didn’t happen..” of  Sunday newspaper To Vima reveals a series of alleged “unknown events that led to the surprise replacement of the military leadership in Greece in November 2011”. According to the report that extends to many pages that alleged coup d’état was averted through the replacement and early retirement of the four chiefs of staff . The decision to change the military leadership of the Greek Armed Forces was decided by the political leadership due to fears of a coup d’ etat. A special reference is being attributed to former Chief of Land Forces and ex  Defence Minister Frangoulis Frangos.

Odd enough Frangos served as Defence Minister in the interim government of Pikrammenos (May 17-June 16 2012), while Eleysiniotis serves as deputy Defence Ministry in Samaras government, with the approval of PASOK, of course. 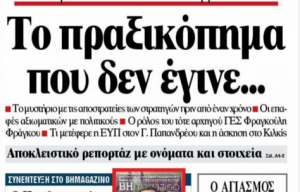 To Vima front page: The Coup that didn’t happen: The mystery about the early retirement of the generals a year ago. The contacts between army officers and politicians. The role of then Land Forces chief of Staff Frangoulis Frangos. What Greek Intelligence Service EYP told to Papandreou and the military exercise in Kilkis.

According to To Vima, “authoritative sources who know the secret thoughts and discussions and decisions of then Prime Minister George Papandreou said that in his view the move [to replace the military leadership] prevented the exacerbation of a climate of political destabilization and prevented a coup d’ etat.”

The decision for the replacement was also attributed to the booing of politicians during the October 28th/2011 parades that culminating into the cancellation of the military parade in Thessaloniki and the booing of the President of the Republic. These incidents put the Prime Minister in thought that there was a process of political destabilization going on aimed at overthrowing the government and a military intervention.

Indeed, the Liberation journalist had mentioned in his article that the infamous meeting between Papandreou, Merkel and Sarkozy in France [Cannes] where they wre informed about the Greek referendum, the Greek prime minister briefed the French president and the German chancellor about a  possible coup d’ etat.”

The Cannes claims were never persuative dismissed by the Papandreou government though.

However, the side of Papandreou dismissed the such claims, while Frangos considers the rumors that he was ‘plotting a coup” or that he was “extreme right-ing” as “offensive and funny”.

The report is supported by the op-ed of the newspaper publisher Stavros Psycharis, whose son, Andreas, was elected member of the parliament in June elections under the ticket of Nea Dimocratia. 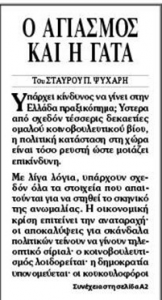 Op-ed: “Is there a danger for a coup d’ eta in Greece? After four decades of normal parliamentary life, the political situation in the country seems so fluid that appears to be dangerous. In other words, there are almost all elements needed in order to establish a state of anomaly. The economic crisis intensifies the uproar, the revelations about politicians’ scandals tend to turn otno television serial. The parliamentary isntituation if being taunted, democracy is being undermined…”

While there are calls for Beglitis to speak out with ‘proof and evidence’,  the leadership of Defence Ministry,  Greek Armed Forces and EYP dismissed the claims of To Vima, as did the office of former Prime Minister George Papandreou, currently a professor at Harvard University.

Chief of General Staff Michalis Kostarakos on Twitter: These [claims] about a coup d’ etat last November are totally unfounded and insulting to the Greek Armed Forces. We are guardians of the fatherland and not perjurers.

George Papandreou office press release: “Then PM Papandreou was not aware of evidence about an impending coup. Similar claims published in European media in November 2011 were dismissed. … The replacements in the Armed Forces were made according to the procedures foreseen by the laws.”

National Defence Minister Panos Panagiotopoulos:  “The Greek Armed Forces were, are and will be committed to the task set by the constitution of the Greek Republic and the Greek people: to ensure and safeguard national independence, the sovereignty and national integrity of the country. Everything else is out of reality.”

Of course, the main general question is: If General Fangos was the initiator of a coup d’ etat, why wasn’t he arrested and thrown to prison, but he became Minister of National Defence under Pirkammenos government and thus with the approval of Nea Dimocratia and PASOK?

A second question of equal importance is: Why are the coup-d’etat allegations ‘resurrected’ amid daily allegations about corrupt politicians, businessmen and reeders?

PS As VIMA report is extremely lengthy, here are the highlight in Part II.