Merkel in Athens: Police Bans Protest Rallies in City’s Centre! Are We in State of Emergency?

The elderly recalled the days during the junta (1967-19674), when puppet government and the colonels were imposing bans on ‘meetings and gathering with participation of more than three people’. The decision of Greek police issued on Monday noon to ban protest rallies in downtown Athens during the visit of Merkel must have indeed caused a creepy thrill on the spines of millions of Greeks.

Despite the draconian security measures, with 7,000 riot policemen, snipers, helicopters and iron fences and barricades, Greek police decided to ban the mass protest rallies in downtown Athens from 9 a.m. until 10 p.m. on Tuesday, October 9th, 2012. Apparently out of fear for the outbreak of riots in the broader area of Syntagma Square and the German embassy near the War Museum.

Greek police issued a statement that any public gatherings and marches would be banned between 9 a.m. and 10 p.m. on Tuesday in a large area around the city centre. It said the decision was being taken in the interests of public safety and the city’s “socioeconomic life.”

The police decision triggered strong reactions also among the coalition government parties PASOK and Democratic Left that issued statements saying that they do not agree with the ban as it forbids the expression of polyphony and different opinion..

In a joint statement, public and private sector unions ADEDY and GSEE announced that they will not bow to police order and that they will hold their protest rallies as scheduled. Trade unions have scheduled to hold their protest at 1 p.m. at Omonia and Syntagma Square, while the party of Independent Greeks has planned to stage a protest outside the German embassy at 6 p.m.

The ban ‘sends’ protesters in Omonia (2 km away from Syntagma) and Areos Park (3 km away).

Seven thousand policemen will be deployed in the city centre and on route from Athens Airport to Hilton Hotel. Snipers will take positions on buildings roofs. Helicopters will fly  over. Iron fences and barricades will be posted around the Greek Parliament, the German embassy and the Hilton Hotel where Angela Merkel will reside during her 7-hour visit and thus as of Monday night. Four police water cannons will be stand by to dissolve any rioting protesters.

Even ‘frogmen’ of the special security units will be stand by, should for some reason Angela merkel and her delegation will pick up the coast line to reach the city.

All across the 36-km route from Athens Airport to downtown via Attiki Odos and Katechaki Avenue, no passerby will be allowed to come close to the road, in closer than 100 meters.

Six or even seven metro stations will be closed to public, as of 10 o’ clock in the morning.

Passerby and cars will be banned from the city centre.

KTG understands that the traffic will be gradually halted when Merkel will be arriving to Hilton Hotel and in the evening while she will be leaving Athens. It is said that Vassilisi Sofias Aveneu will be closed to traffic form Hilton Hotel up to Greek Parliament. Also all roads around Syntagma Square until the beginning of syggrou Avenue.  Traffic will be open in Alexandras, Kifisiaw and Mesogiion Avenue, except when Merkel is moving around.

KTG also understood from prime time news in Greek TV channels, that a protest rally will be held in the downside of Syntagma Square and that protests and gatherings are not allowed in the area Parliament – Kolonaki – German embassy – Hilton.

KTG would urgently advise its readers to avoid the city centre if it’s possible.

It will be the biggest security operation in Athens. Even bigger than the one back in 1999, when US-President Bill Clinton visited Greece in a ‘hostile’ atmosphere. 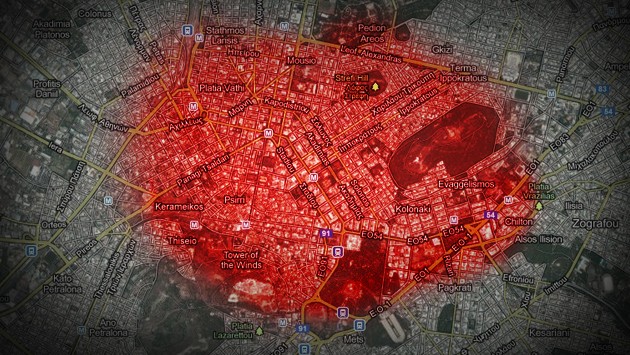 Angela Merkel’s airplane is scheduled to land at 12-12:30 noon. She will meet Prime Minister Antonis Samaras at Maximos Residence and President Karolos Papoulias at 5 pm. Merkel will be accompanied by her own safety guards. She will attend a lunch/dinner at the Museum of Acropolis [then wait that also the Acropolis metro station will be closed].

However there seems to be a hide-and-seek game with Angela’s landing and take off program as well with her meetings with Samaras and Papoulias.

Merkel’s Program: She will first meet Samaras. Both leaders will hold a press conference and proceed for lunch at Dionysos restaurant. She will meet Papoulias at 04:45 p.m. Later she will go to Hilton Hotel, join a meeting organized by the Greek-German Chamber of Commerce and depart when the conference concludes.

PS for those who might think we have a war or dictatorship tomorrow morning at 11 a.m. … it will be just the exercise of Civilian Defence that will have sirens in operation! According to Civilian Defense announcement the sirens will be in operation at 11 am for 60 seconds and at 11:05 am for 60 seconds. “It’s just a test. No need for panic or confusion,” the statement read. A sirens test on the day where Merkel arrives and the downtown Athens s being declared into a ‘red zone’? Are you nuts, guys?

UPDATE: according to unconfirmed reports, the sirens exercise scheduled for tomorrow has been postponed.