Dozens members of extreme-right Golden Dawn and religious organisations attempted to storm a theater in Athens on Thursday evening to stop the premiere of  Terence Nally’s play “Corpus Christi”. Riot police was deployed outside the theater “Chytirio” in Iera Odos Avenue in the east of Athens, teargas was fired and some protesters were detained. Among the crowd were two MPs from Golden Dawn. One of them even freed a detainee and took him out from the police bus. 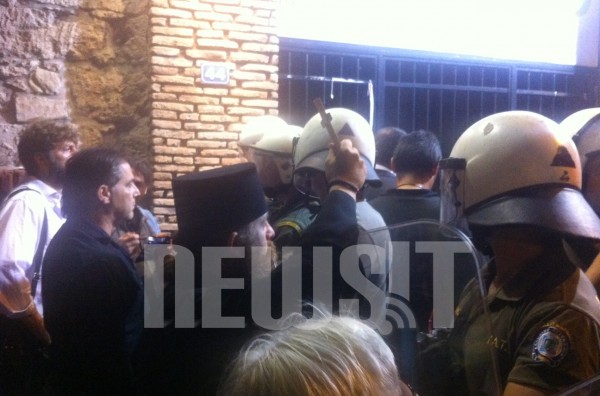 The some 100 protesters had gathered outside the theater chanting slogans that the play is a blasphemy. They tried to interrupt the play and break through the riot policemen deployed outside the building. As they wouldn’t step back, the police made limited use of tear gas. However they tried again to enter the theater and threw yogurt at the entrance. 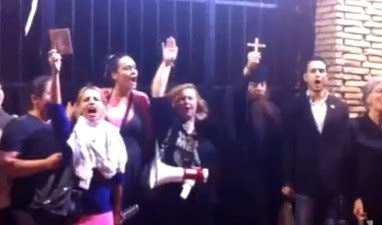 As police chased the protesters in the surrounding streets , four people were detained.

And then the unprecedented happened: Christos Pappas, Golden Dawn MP, rushed to the police bus and freed an older man. Right there in front of the policemen’s eyes who refrained from stopping this incredible incident. Pappas grabbed the man from the arm and the two left , while the police was just looking passively.

When Newsit reporter asked the head of the deployed policemen how comes the MP freed a detainee, he replied that ‘detentions are virtual’.

At the same time, somewhere near and away from the cameras, a reporter from Lifo-Magazine was beaten by the protesters.

Manolis Vamvounis described minute by minute in a convulsive way via  his twitter account  (see a text description here)how he was humiliated by the religious fanatics and was attacked by GD-members, while the police was standing by doing nothing. The injured man sought shelter to a friend’s home and wrote that he was afraid to file a lawsuit to police. Then one of of the men who punched him was a “well known GD-MP”, Manolis claimed without making public his name.

The man, who was scared to death, had deleted his profile on Facebook out of fear, he wrote.

Despite the ugly incidents, the actors decided to continue and four MPs from opposition party SYRIZA and coalition government partner Democratic Left rushed to show solidarity and attend the performance. Nikos Bistis (SYRIZA) called the incidents “A shame for the democracy” while Tasiopoulos demanded the intervention of prosecutor.

Outside the GD-MPs were shouting that they want to attend too.

On Thurday morning, religious organizations had submitted a request for the performance to be cancelled, a request that was rejected by an Athens court.

Corpus Christi is a passion play by Terrence McNally dramatizing the story of Jesus and the Apostles. Written in 1997 and first staged in New York in 1998, it depicts Jesus and the Apostles as gay men living in modern-day Texas. The play was condemned by the Catholic League as blasphemy and sacrilege. Terence Nally had even received death threats.

The premiere was scheduled for Octber 4th but due to protests by GD and religious fanatics it was postponed for today evening.

+++ Meanwhile there is video showing GD-MP Panagiotaros (the one who asked data about foreign infants in nurseries) in a xenophobic and homophobic delirium. There is a translation, but you shouldn’t read if you may get offended.

PS No reaction by the Minister of Citizen Protection or Justice or Culture or any other official so far.