Millions sat in front of their TV screens on Monday night in order to watch the firsh episode of multi-awarded and multi-advertised British television series “Downton Abbey”.  While we were watching in sheer delight the story of the aristocratic Crawley family and their servants in the post-Edwardian area, suddenly the picture jumped. Slightly. For a second or even less.. The screen was showing Duke-whatever having a dispute with servant=whatever to whom he had a love affair in the past. 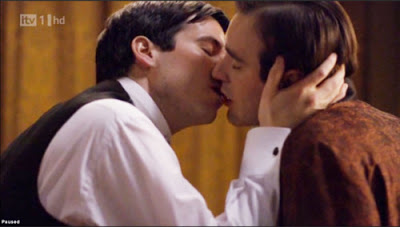 THE kiss Greeks were not allowed to see

State broadcaster NET TV had decided the gay kiss was a NO-NO for Greeks and it had to be censored. In Europe of 2012…

Downton Abbey is being broadcast at 10 pm and is shown with the indication “allowed for all ages with parent consent.”

The scene shows Duke and servant exchange a short kiss, a scene lasting no more than 12 seconds.

The censorship triggered strong reactions among the audience who angrily commented on social media. One internet user directly asked NET TV on Facebook page “was it censorship or did it look like that?” The answer he received was “It looked like that”.

SYRIZA MP Papadimoulis asked via his Twitter account “who intervene to have the scene censored? Bishop of Piraeus or The Golden Dawn?”

According to Skai TV, NET is planning to repeat the first episode of Downton Abbey with the uncensored scene tonight.

To tell you the truth I am not sure whether our state broadcaster found the kiss worth of censorship because of sexual or social reasons. Was NET TV disturbed because two men were kissing each other or because a a servant was kissing a duke?

Back in 2003 the Radio & Television Council had fined private Mega TV for showing a kiss between two dressed men.  Three years later the Highest Administrative Court had cancelled with decision with the reasoning that the kiss was merely presenting a simple homosexual desire. But that was back in 2006…

The irony of the issue? Newly appointed director of ERT/NET TV is the former director of private STAR TV, a channel that has no problem to show wild parties on Mykonos  and 89% naked women butts during the summer time. Star prime time news run at 8 p.m.