Wedding in Times of Crisis: Have a Party at Petrol Station

Famous Belgian photographer Nick Hannes describes the wedding at the gasoline station as “weird”. And so it was. In times of economic crisis a petrol station owner decided to to have his wedding party at his onw petrol station in order to save expenses. What if the fumes of fuel were giving a surreal touch to the event? The happy couple surrounded by family and friends danced and had fun for this special day that marked their new life. 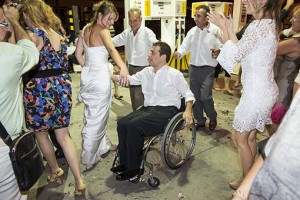 “Doing prospection for my Mediterranean Project in the port city of Patras, Greece, I bumped into this weird wedding party. Christos Karalis (44), who married Anna (26), decided to have the party in his petrol station, to save on expenses. “This is how we respond to the crisis”, a family member said to me. “Please show these pictures to Merkel. A Greek keeps on laughing and celebrating, even when his money is being taken away.”

Late at night traditional Greek music was being played and people started to dance the sirtaki. It was a great party. Not only because of the setting, but also because of the hospitality of the whole family.”

Nick Hannes published the wedding pictures and the short story on his blog and some of them were even published in Belgian newspaper De Standaard. 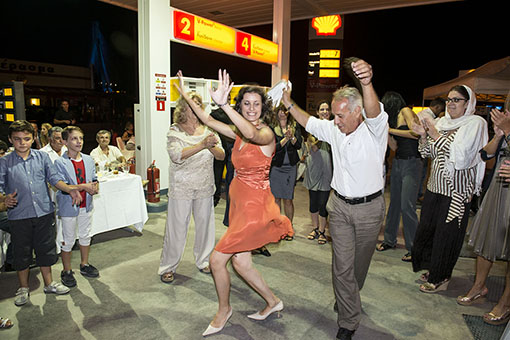 Well done, guys, and thanks for this great story! As we say in Greek “you gotta have a good time, when you’re poor!” Happy new life full of roses 🙂