Monthly magazine HOT DOC managed the impossible: To get what it seems to be the content of the long-missing and infamous Lagarde-list containing the names of 2,059 Greeks who had an account in the HSBC bank, Geneva, Switzerland. More than 2,000 excel-files expose the names of bank account holders. HOT DOC does not expose the amounts deposited n each account, but just names and professions. 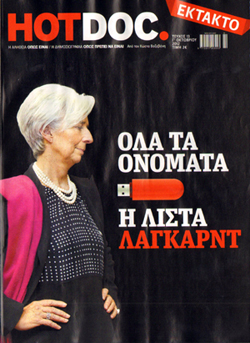 Among the Greek HSBC-depositors are famous businessmen and journalists, doctors, lawyers and engineers, actors and civil servants – some of them working at the Finance Ministry. The list contains also the names of three former ministers, of whom one died sometime ago. Also the names of owners of enterprises that have gone bankrupt. But also students studying abroad, pensioners and housewives (certainly not as desperate as one would think…).
However not only Greeks but also name sof foreign nationals are on the list – apparently having transferred money to HSBC from Greek banks.
Of course, the names on the list are not to be definitely considered as tax evaders. as it is not illegal to transfer money abroad – provided the amounts are not product of criminal acts and tax evasion. HOT DOC stresses on the issue:

“It is apparent that a large portion of deposits are not justified with the income of depositors. Proof is that most accounts were closed after the bank briefed on the data leaking.”

Magazine publisher and journalist Costas Vaxevanis writes,that he had received the list content on a usb-stick “by somebody” who wrote to HOT DOC that s/he “believed that the list has been misused for political and economic purposes for two years.”
The list was given to ex Finance Minister George Papaconstantinou in October 2010 by then French Finance Minister Christine Lagarde, now head of International Monetary Fund. The HSBC data were stolen by former bank employee Herve Falciani in 2007.  While countries like France, UK and Germany mad use of the list and invited tax dodgers to pay what belongs to the state, Greece had the list going from ministers’ drawer to ministers’ drawer for two years in an unprecedented Odyssey for a country that struggles with bankruptcy and where massive tax evasion is one of its “deadly sins”.
Just a couple of days ago, Papaconstantinou told the Parliament committee investigating the hot potato of Lagarde-List,  but he does not know where is the original list.  A couple of weeks earlier, ex Finance Minister Evangelos Venizelos had admitted to have the content of the list on a usb-stick.
The original content given to Greeks on a CD has been copied on a usb-stick and apparently travelled from minister to minister and from prosecutor to prosecutor with the effect that nobody seems to know exactly who has the original data. Or “that nobody wants to give the names on the list” as the austerity-ridden and recession-hit public opinion believes.
Official Reactions
So far there is no official reaction to the publishing of the list. Neither confirmation nor denial about its authenticity. Although the files were posted on Greek websites on Friday evening.
Even HOT DOC clarifies that it was unable to ascertain whether this was the original Lagarde-List:

“Our controls led to the conclusion that this is the list of Greek depositors to HSBC until 2007 when the leak started. So this list was identical to the Lagarde-List. But we can not check if this is the [original] list received by Papaconstantinou or a list being formed later after the removal of some names in an potential attempt to hide evidence.”

Until now, one journalist said that he had no bank account abroad and a well-known lawyer declared that his family had transferred money abroad in the late 1980’s to cover surgery expenses for a family member. Another journalist said he had no money abroad at that time, while a former Nea Dimocratia minister and his wife dismissed any connection to the list.
Prosecutors in action?
According to latest information, independently of whether the list is authentic or not, economic prosecutors are allegedly collecting evidence by cross-checking the names on the published list, the deposit amount and the income declarations of the persons involved. At least, of the most striking names. At the same time there is a cross-check as some of the names  appear to be relatives of former ministers and prime ministers.
Prosecutors will also have to investigate whether there was political intervention to hide the list in the context of covering up and intermingling between politicians and media. “If such attempts are proven some politicians and state officials should sit in the court room,” prosecutors allegedly said.
Even though HOT DOC refrained from publishing also the deposit amounts listed next to name and profession, the money each one of the HSBC-account holders was indeed on Falciani/Lagarde list.
Although HOT DOC  will upload the full list on its website upcoming Thursday, a news portal bought the print edition -on the market since late Friday-  copied the files and uploaded them on their websites. The spreading of the files through internet was then a matter of few hours.(news247.gr , newsit.gr, zougla.gr and others).
All Lists with Politicians to Parliament
On Friday, economic prosecutor of Areios Pagos (Hellenic Supreme Court of Civil & Penal Law) gave orders that all lists (Lagarde, Economic Crimes Units-SDOE) containing names of current and former politicians they should be sent to Parliament for official investigation. Also the names of wives and even minor children of politicians under investigation for possible ‘illegal enrichment” and thus since 1974.