Merkel Outraged about Greeks on Strike; She May Consider to Impose Curfew?

“You have to tell them, ‘It is not right, that every time I go on strike when a privatization is due,  it is not right that a railway company is not able to pay its employees due to the ticket fares, it is not OK if the government ministries do not cooperate with each other, it’s not OK if one has a taxation system, but not paying taxes.”

I assume, that the aversion and the lack of understanding for the frustration and anger of austerity-ridden Greeks, have very much to do with the former DDR-mentality of Frau Merkel, where even basic labour rights were forbidden and hardly one dared to whisper “b” when Honnecker was singing “A”.

Nevertheless, Angela Merkel was sharply criticized by her own German people, with leader of European Socialists, Hannes Swoboda telling her:

“Together with the Troika you demand something, you would never demand in Germany: namely, the destruction of social networks”

Left MEP Gabi Zimmer told her: “Austerity kills! What is good to be more competitive if it takes people to perish?”

Rumors that Merkel considers to impose curfew on days of scheduled protests and to send her own tax-collectors to invade each and every home in Greece are not confirmed. At least, not yet. 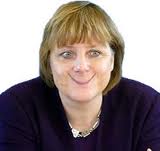 No Greeks, No Strikes!