Greek public opinion is divided.  Part of the society condemns the apparent beating of the four suspects arrested in Velvento, Kozani. But another society part hails the beating claiming it was deserved as the “kids” (as they are called here) were armed with heavy weapons. Minister of Justice, Antonis Roupakiotis, openly declared that he was “chilled” to see the abused face.

“I was chilled by the pictures showing their swollen eyes and lips,” Roupakiotis said.

“On the other hand — and I am not trying to measure my words — when you clash with someone wielding a Kalashnikov assault rifle, you can’t be holding a flower,” he added. “This sort of thing is violent by its nature.” (ekathimerini)

The arrest of the four bank-robbers, aged 20-25,  made everyone wonder about the social background of the perpetrators who seem to claim it was a “politically motivated act.”  From what it is reported in the Greek press, at least two of them have been raised in middle class families, with a solid economic background and education.

Speaking to the Greek press, the parents not only supported their bank-robbers “kids” but also justified their violent acts.

First to support her son’s acts was Paulina Nasioutzik, mother of 20-year-old Nikos Romanos. “I am very proud of my son struggling against an illegal and unlawful and rotten society and will defend him to the last drop of my blood,” Nasioutzik told private Alpha TV on Monday. 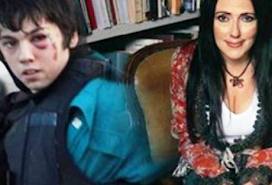 Paulina Nasioutzik is writer of novels and historic books and the daughter of arts collector Athanasios Nasioutzik (former president of Greek Authors Society) convicted for the murder of author Thanasis Diamantopoulos in 1984. She is known to Greek readers from books she wrote on the boring life of “moms of the north suburbs” – a social class of its own, referring to the residents of the northern suburbs of Athens, living in wealth, luxury and exclusive lifestyle.

Upon his arrest Nikos Romanos let through his lawyer know that he was considering himself to be “prisoner of war” and that his motives were “political”.

“He is a good boy, he is not a terrorist,” Yiannis Bourzoukos, retired icons painter,  described his son Andreas-Dimitris stressing the social activities of the bank-robber in spe.

“He would take the bite out of his mouth to give it to those without food,” Yiannis Bourtzoukos told Ethnos daily, adding that he had raised funds for prisoners, migrants and those who had nothing.

“He wants another society.  It’s an anarchist ideology, but it has nothing to do with terrorism. An anarchist, like everyone in the family. But not relation to terrorism.”

The father justified the carrying of guns claiming that they were for ‘intimidation’ as his son did not even know how to handle weapons.

The mother of Andreas-Dimitris is a doctor at the Greek ambulance service EKAV.

“They are political prisoners, even though they are considered as common criminals,” the mother of third suspect Yiannis Michalidis told daily “6 Meres.”They don’t want to be victimized. Whatever they do and say, they do it out of a stable and upright political stance.” Describing how her son, covered with a jacket, was kicked by policemen who were also were insulting his mother, she added”

“These kids have no lies. Whatever they do is a stance of life. That’s all I want to say about my son.”

Michailidis is suspected to be the ‘archer of Syntagma square’, against him there was an arrest warrant for alleged participation in the outlaw group “conspiracy of the cells of fire.”