Ha! Greece’s government assurances, the minimum wage would not be further reduced, have just been turned into multi-coloured confetti! EU Monetary and Finances Commissioner Olli Rehn admitted that minimum wage revision is planned for 2014.

“Revision of the system of minimum wage is foreseen for 2014, with the aim to be improved and be more effective in regards to increase employment and improvement of competitiveness in economy. The social partners will participate in this revision dialogue.”

Olli Rehn refrained from explaining the absurdity of using the phrase “minimum wage will be improved“, when it will be further reduced and will worsened the living situation of employees. 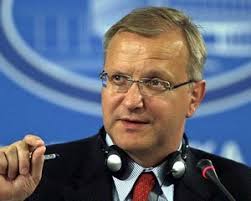 After Olli Rehn’s answer, Chountis issued a statement speaking of “government hypocrisy” and stressed that as of “1. April 2013, the minimum wage will be determined through a legislation issued by the Cabinet independently of whether the social partners will agree or not.”

“Pay raise? You know the one with…”

An outrage was triggered in Greece when the general secretary of Greek finance Ministry said on Tuesday, “the minimum wage was still too high in Greece.” Minimum wage was reduced from 780 euro down to 586 euro gross and 511 euro for those up to 25 years old on 1.1.january 2012.

KTG proposes, that EU, IMF and national governments cancel all together the minimum wages and have employers give employees a monthly remuneration in form of a monthly card for free transport in the public transport means.

PS it’s high time all these highly paid EU and national politicians, the drones sucking the bread out of the taxpayers’ mouth, go home.

Greek Police seized a total of 1,513,555 euros in cash and amounts of cocaine, cannabis …