The symbolic occupation of the private office of general secretary of Finance Ministry Giorgos Mergos by members of the youth organization of left-wing SYRIZA ended in teargas and the injury of two MPs. Protesters moved to the office of Mergos and raised banners against the further lowering of minimum wage. When they left the office, riot police was awaiting for them at the building entrance. 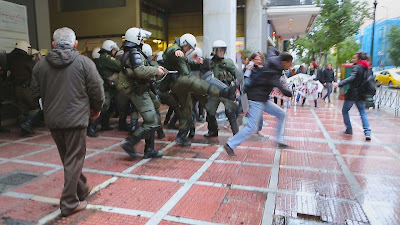 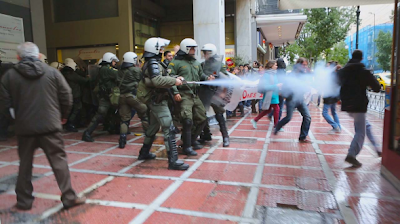 Police used teargas against the protesters. Two SYRIZA MPs, Kostas Mparkas and Vaggelis Diamantopoulos were allegedly beaten and kicked by the police.

“We showed them our ID and they, without saying anything started to push us, kick us, insult us and beat us with fists. They knocked us down and fired tear gas in a enclosed area without saying anything,” Kostas Mparkas told VIMA fm noting that they would seek legal measures. He got some injuries on the leg and the head, he said.

Protesters remained outside the office of Mergos at Stadiou street in downtown Athens shouting “Nobody can lives on 500 euro, take the Memorandum and go away.”

“In a country when the youth ‘enjoys” wage of 500 euro, it’s a provocation to claim that workers in Greece are overpaid,” said SYRIZA youth organization in a statement.

UPDATE: According to latest information, Greek police launched an investigation to allegations, the two MPs were beaten by riot police.

Giorgos Mergos caused an outrage in society but also among the coalition government partners and opposition parties, when he claimed on Monday, that the minimum wage in Greece is too high and it should be reduced.

Minimum wage was cut from 780 euro down to 586 euro (511 euro) gross per month as of 1.1.2012 due to Troika loan agreement supposedly to boost competitiveness.