February 22, 2013 Very Mix Comments Off on Cleaning lady at Greek Parliament hovers in the air trying to mop up rain water 61 Views

Almost a miracle saved the life of a cleaning lady at the Greek Parliament when the part of the glass skylight roof broke and she found herself hovering in the air for several minutes. 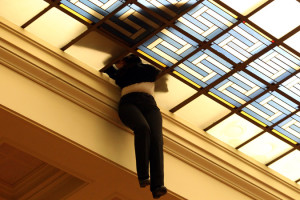 The woman was trying to mop up rain water from the skylight roof over the Palriament plenary hall as water was dripping inside. According to state broadcaster NET, the woman slipped on the glass tiles, the metal frame reportedly gave in, the tiles broke. 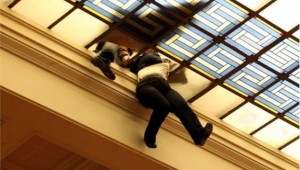 The woman found herself hovering in the air, more than 10 meters over the floor.

A policeman apparently accompanying the cleaning crew and some of her colleagues grabbed her and dragged her to safety. The woman was taken to first aid station of the Parliament. 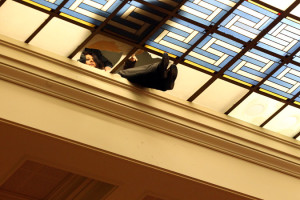 While there are major questions about the safety rules in the Parliament, media report that the woman was tied with a safety belt.

UPDATE: it turned out the woman was not a cleaning lady but an officer from inspection team.