Athens Municipality “arrests” dog for anti-austerity barking at the Troika

Everyone remembers  the show staged of Ruby, Sakis and Stratos beginning of the month. Together with photographers and cameramen, the three Athens strays had lurked the Troika representatives outside the Greek finance ministry and started an anti-austerity barking when they arrived. 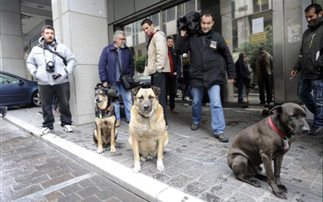 Next day, reports  in the Greek press claimed that at least one of the Troikans – EU representative Matthias Morse – had complained to finance minister Yiannis Stournaras about the strays and asked measures.

Obeying the Troika’s demands the Athens Municipality arrested at least one of the dogs. The arrest followed a complaint that Ruby allegedly had bitten a citizen.

the citizen has reportedly claimed that he was bitten by the dog while he was peacefully sitting at a cafeteria at Syntagma Square.

Municipality workers located Ruby who is usually hanging around in the area and took him to a municipality shelter in Megar, some 50 km away from Athens.

Animal lovers who take care of the Syntagma strays say that Ruby is a very friendly dog and has not showed any signs of aggressivity. they also stressed that the dog does not hang around at Syntagma square but in the nearby streets [near the finance ministry].
Aggelos Antonopoulos, the deputy mayor in charge confirmed the incident and made it clear the dog was not arrested but ‘collected” two weeks ago.
The responsible committee is expected to decide soon if the dog will be released and can return to his old living area or be located somewhere else. (newsbomb.gr via nonews-news.blogspot)