Several people lay down, unable to move. Others suffer in pain. More people are standing exciting and speak in a language we don’t understand. The exclusive video uploaded by daily Kathimerini on its website, displays footage filmed short time after the shooting at immigrant workers near the Manolada strawberry fields in Ilia, Peloponnese, on Wednesday afternoon.

At least twenty-eight strawberry field immigrants workers were transferred to hospital after being shot by the foremen of their employer.  A large group of some 200 immigrant workers mainly from Bangladesh and Pakistan went to meet with the foremen of their Greek employer, demanding outstanding wages for the last six months. According to local media, the total outstanding payment was some 150,000 euro.

A group of strawberry fields workers told Skai TV, that the only money they receive from employer is to cover food expenses.

However the two groups had a dispute, they wrangled with each other and the three Greeks took up rifles and started blindly shooting into the crowd. The workers started to ran in panic, while they were being shot on the back and other parts of their bodies.

On Thursday, there are still seven hounded in the hospitals of Patras and Pyrgos and according to police none of them is in critical condition.

Greek police arrested the 57-year-old employer, owner of the strawberry field and also a local resident, 38, who offered refugee to the shooters last night. The foremen, aged 21, 27 and 39,  are still on the run, while latest reports citing their lawyer claim that they would soon give themselves in. 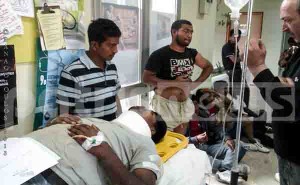 Media report that the 27-year-old was involved in a similar incident with outstanding payments to foreign workers.

Last August, the man together with another Greek had captured the hand of an Egyptian worker with the car window and dragged the worker several meters injuring him. The trial for the incident is still due.

The owner of the strawberry field with the unpaid workers declared to be ill after this arrest by the police and is currently hospitalized under police guardianship.

As the employer is also member of the Association of  Merchants at Central Vegetables Market in Athens, there is information that he might be expelled from the association.

The unprecedented incident triggered an outcry in the Greek society, with all political parties condemning the Manolada shootings.

Although the exploitation of immigrant workers in the strawberry fields was known since several years, the Labour Ministry sent inspectors to check the working conditions of strawberry pickers a day after the shooting.

Arrest & deport of the wounded

Ministry for Public Order, Nikos Dendias condemned the attack and said in a statement:

“Respect for the law is a fundamental obligation for all of us, but also a necessary condition for the country’s economic revival,” and criticized the cases of economic exploitation.

After the sober statement, Dendias ordered the arrest of those wounded, exploited and unpaid immigrants workers.

Local IliaLive.gr reported that four of the injured were arrested after been released from the hospital where they were treated. They are currently held in detention and are waiting for the deportation from Greece – it looks as if they were illegal immigrants.

Several  have called on consumers at home and abroad to boycott Manolada strawberries. A social media campaign was launched on Twitter under #bloodstrawberries.

Strawberries with Blood? No thanks

For years the Greek state used to turn a blind eye to the strawberry fields conditions, although the working conditions are not new. The issue has multiple factors: a) social funds contributions evasion on the side of employers b) workers living in squalid conditions in self-made … hothouses c) a number of workers are undocumented d) rifles speak with the aim to kill. All these in a production area with 90 million euro turnover per year and exports to Russia and Germany.

After the arrests, the deportations, the prosecutors and the outrage, hopefully not both eyes will turn blind – again.