Why jobless Greeks do not go strawberry picking?

There has been lots of discussions in my environment about why jobless Greeks do not go strawberry picking. Of course, it’s not only strawberries growing in Manolada, Peloponnese. It’s the peaches in Naousa, Macedonia or the apples in Zagora, Pilio just to mention a few of the agricultural products flourishing in Greece. But let’s stick to the strawberries as the shooting at migrant pickers last week brought up this particular issue. Apart from the pure racist aspect, more aspects came to the surface: the inhuman living and hygiene conditions of the pickers in the fields, the daily payout. Not that nobody knew these conditions as they started to be reported in the Greek media since 2008. But the latest incident showed how an agricultural sector lives on the exploitation of migrant workers. How about the Greeks? The young jobless Greeks who according to statistics are jobless at 59.3 percent?

Why don’t they go and pick strawberries?

Occasion to start a debate with a friend was one strawberry field owner claiming in the media “We offer these jobs to Greeks but they don’t come to work.”

As my friend deals professionally with fruits and vegetables, he has a quite inside knowledge, I would say.

So we started to talk about why jobless Greeks do not grab this once-in-a-life-time job offer and move for two months to Manolada to pick up strawberries. A chance for healthy body training for young Greek men and women right in the middle of fresh air environment and with several hundred euros in the pocket at the end of May, when the strawberry season is over. 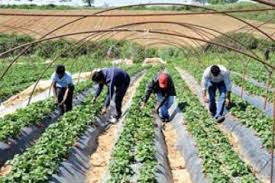 Of course, strawberries picking on a 10-hour daily basis is nothing for people above 30’s if they do not have work experience in the fields. The backbones around the waist refuse to play the game. Especially if one has spent his whole life in the city, on a chair, in the arms of a couch. “Spoiled society” one may say, but … whatever. That’s the physical situation of a modern western society. 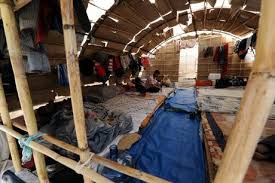 My friend argued that the young jobless Greeks were possibly much too comfortable – if not lazy and even snobbish – to do such “lower work”.  His argument was in line with the one posed by the strawberry field owner from Manolada. In line with ‘throw the shit right in front of the fan’.

My argumentation came out of pure curiosity: does it worth financially for a Greek to go and pick up strawberries?

616 euro per month is higher than the minimum wage in Greece, which is 580 euro gross and 510 gross for those below 25 years old. Workers on minimum wages get normally 480/420 net in the hands after the subtraction of social contributions.

But let’s see the cost for this one/two months work for a jobless young Greek – mostly with university or technical college education – who has to move Manolada from another city like Athens.

Daily expenses for food and other personal needs: 2 euro? 3 euro per day? Certainly at least 100 euro per month.

Accommodation: a) rent a small house/apartment together with other seasonal workers: That would make at least another 100-150 euro per month – utilities included. b) rent a flat alone: That would make juicy 300 euro and leave the worker with 200 euros in the hand after two months of work (transportation cost incl.)

Cheap alternative accommodation: the makeshift huts out of plastic sheets and wood pieces, no toilets. Migrants workers told Greek media, they pay 20 euro/month to the field owners for this kind of accommodation.

After one months’ work the lucky Greek strawberry picker could go home in best case with 316 euro in the pocket, or 631 euro if he goes away after two months. In the strawberry fields of Manolada, he would earn so much as he/she would earn in the city with a part-time job or full time job, living home in civilized hygiene conditions and occasionally go out with friends for a coffee.

Manolada: accommodation for €20 per month

Too comfortable to work in the fields?

Last year, Eleni, 26, was telling me she had even considered moving away from Athens and get a job even foreign to her university degree in Economics. “All I would earn would be spent to cover the cost of living. We calculated with my parents, and they would have to send me some 100 euro per month to cover my very basic needs.” So she dropped the plan, because she could not see a meaning in such working conditions. She is still jobless.

Two days ago, I asked Nikos, 30, whether he would go to work in the strawberry fields. “To tell you the truth, I thought about it,” he replied. “But you know what? I will toil for nothing just for the shake of the field owners’ profit. It’s not that they don’t make profit, they just do not honour the work. I heard in the news, the strawberry turnover is 100 million euros annually…”  Exactly one year ago, the web  developer resigned from the company he was working, after he was not paid for six months. He lives in his parents’ home.

Just yesterday, I posed the same question to Andreas, 28, jobless. He replied: “Yes, sure! And live under a plastic panel, cook on a camping gas and pee in the fields. Certainly! HAHAHA! Sure! I’d rather go free-camping next to the sea. Exactly the same! HAHAHA!”

Certainly, not all jobless young Greeks live in Athens. But why should one from the areas with highest unemployment like Macedonia move to 700-km away Manolada, if there are agricultural work options just around the corner? Why farmers in Macedonia ‘import’ foreign workers from Bulgaria for the peaches or apples picking? 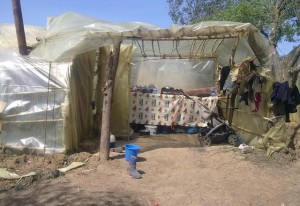 Another friend told me one more thing on the issue: that the field owners would not get Greeks as workers, out of fear they would call the labor inspectors and denounce them for breaking the law as they would hire them without social insurance. On the other hand such contributions would raise the labor price unit of at least 8-10 euro per day. But if they would hire by the book, that is with the monthly minimum wage, they would hardly find any Greek seasonal workers as they would have to come from other cities.

I read today, that Labour minister is due to visit Manolada on upcoming Monday, where he will meet with strawberry field onwers and migrant workers. Strawberry fields owners complain about the huge damage on sales caused by the shooting incident.  Migrants apparently are scared to return to work out of fear of retaliation.

So far, I didn’t hear anything that Yiannis Vroutsis may had any intention to convince field owners to hire Greek young jobless. He wouldn’t dare under these wage and living conditions, would he?

*names of Greeks quoted here have been changed

PS the post turned much longer than originally planned, but I just tried to draw a more thorough picture of the issue.