Two cargo vessels collided in the early morning hours of Monday with one of them to have sunk 78 nautical miles south west of Methoni, Peloponnese. Cargo ship “PiriReis” under Cook Islands flag with 17 Syrian seamen crew “sunk within 7 minutes” survivors said according to Greek media. Eight seamen are missing, while the bodies of two were found.

There seems to be no human or serious material casualties on the other ship involved in the collision. ConSouth was sailing under Antigua-Barbuda flag and had a 16-member crew: 5 seamen from Russia, 10 from Poland and 1 from Philippines.

PiriReis was carrying fertilizer from Algeria to Ukraine, while ConSouth was empty and was sailing from Turkey to Malta.

A big search and rescue operation is underway with coastal guard ships, four commercial ships, one C-130 and one Shikorsky helicopter.

The reason for the collision is not known so far. According to the deputy mayor of Pilos, the weather conditions were good but there are occasional mists in the area where PiriReis sunk. The collision occurred near the island of Sapientza. 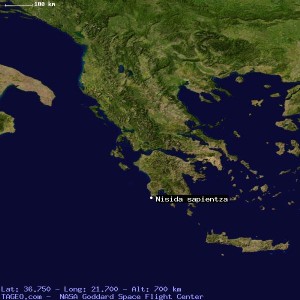 Deputy mayor of Pilos told state broadcaster NET TV that the weather conditions were excellent when the collision occurred short before 6 o’ clock in the morning.

Greek Maritime Minister said that preliminary information blame ‘human error’ and that it was vessel ConSouth that rammed PiriReis.