No signal: Countdown for Greek coalition gov’t over ERT, exactly on its 1st anniversary

Monday is a crucial day for Greece’s coalition government. The decision of prime minister Antonis Samaras to shut down public broadcaster ERT overnight on Tuesday, June 11th 2013. While Samaras remains adamant on his decision, his coalition government partners PASOK and Democratic Left categorically oppose it. They demand to discuss the restructure of ERT with the TV signal restored and the public broadcaster in full operation and program transmission. 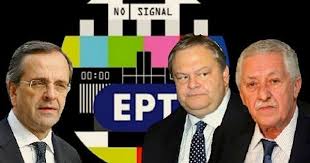 They accuse Samaras for governing the country with Legislation Acts, cancelling the role of the Parliament and without previous consultation with his coalition partners.

A meeting between the three party leaders is scheduled for 7:30 p.m. on Monday.

There is talk, whether Samaras took the decision to shutdown ERT overnight in order to provoke his coalition partners, get rid of them and take the country to early elections. so that he could get a fresh order from voters and govern without his partners that often put obstacles to his determination to proceed with reforms – as it has been claimed.

However, snap elections are not automatic should the coalition government break apart. Then Samaras’ Nea Dimocratia did not win the absolute majority of votes during the elections of June 17th 2012. Samaras was sworn-in on June 20th.

Not wanting to miss the opportunity, Alexis Tsipras (SYRIZA) has called on an open political meeting , Monday 8:00 PM at Syntagma Square. The meeting of coalition partners was initially scheduled for 6 pm but was postponed for 7:30 pm.

Antonis Samaras already initiated the ERT-successor, “NERIT”. The signal of the new public broadcaster is already on the digital platform with color bars. NERIT is on ex ERT-NET frequency.

Unconfirmed information claim that the Prime Minister will address the public on Monday via NERIT. However it is not clear with what personnel – journalists and technicians – NERIT will operate as of today (?). Last week, Samaras spokesman had announced that NERIT would hire personnel via public contest ASEP.

I don’t think there was any ASEP contest over the week end… Therefore….?!

Nevertheless, according to ex-ERT, NERIT is illegal as nobody can launch a public broadcaster without a previous approval by the government and signature by the President..

Meanwhile the fired journalists and tehcnicians of ERT continue to broadcast their pirate program via the internet and thus on 24-hour basis. Thousands of people flock every day to ERT headquarters to express their support.

News on ERT you can read on website ertopen. operated by the fired ERT personnel in Greek and four other languages.