Greek Finance Ministry called for the immediate evacuation of the headquarters of  public broadcaster ERT under occupation by the fire personnel. In a statement issued on Friday afternoon, the Ministry announced a plan for the compensation of the dismissed 2,656 ERT personnel.

In a short statement, the Finance Ministry calls for the personnel to immediately evacuate the building so that the government “can directly implement the decision of the Council of State” and that “the finance ministry gets access to financial/human resources data so that it can calculates compensation for several groups of former employees.”

On Monday and Thursday the Council of State ordered the immediate restoration of all television channels and radio programs of shutdown ERT.

From the side of ERT personnel, the first reaction to Finance ministry’s call was “ERT-personnel union and the journalists’ union will take the relevant decisions and respond to the government.”

One hour later, the president of ERT-union PROSPERT said that they will stay in the building, as this plan of restoring broadcasting on temporary basis would annul workers’ rights on unemployment allowance, among others.

Alarmed from the perspective of a possible violent evacuation, ERT personnel has been calling on colleagues, unions and activists  to ‘take position’ and be on alert.  Greek social media are on alert on the issue. 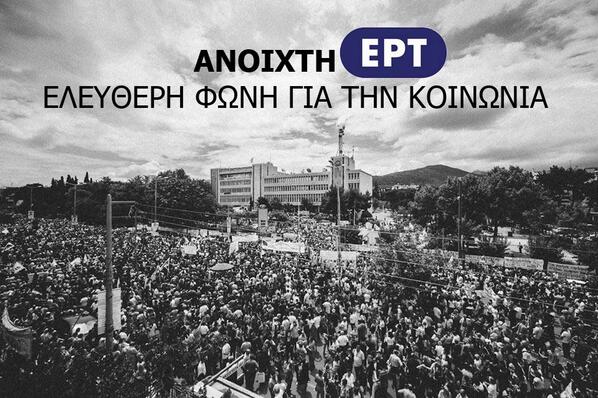 OPEN ERT – Free voice for the society via @ErtSocial

ERT personnel has been occupying the building since 11. June 2013, the day prime minister Samaras order the sudden shutdown and blackened ERT television channels. With the help of EBU ERT broadcasts on a 24-hour basis since its closure.

The finance ministry has taken over the ERT management.

PS they won’t dare send riot police to ERT, would they?