Breaking News
Home / News / Politics / Piffle of the Day: Greek FinMin “We would be like Egypt without the euro”

Piffle of the Day: Greek FinMin “We would be like Egypt without the euro”

They are unbeatable. And eternally stuck to cliches. They cannot see beyond their nose. They run behind their tail  unable to make a step forward. Trapped in the notorious Greek introversion. And they are bold to show it off right into our face. Who? The Greek ‘politicians’, of course. Although Finance Minister Yiannis Stournaras is not an elected politician but an appointed accountant who rules the country as the extended arm of the Troika.

Proving that he has absolutely no idea about the uprising background in Egypt, Stournaras linked the developments in Egypt -where the army overthrew elected president Morsi – with the possibility of a Greek bankruptcy.

Stournaras was asked to comment on the evens in Egypt. He did not hesitate to stress that Greece would have the same fate if it had gone bankrupt.

“We would be like Egypt if we had gone bankrupt and out of the euro, as some argued,” he said. 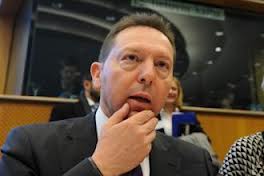 PS How long do we have yet to hear these non-stop nonsenses and be victims of blackmail to accept any illogical Troika demands?