A teenager girl in shorts test driving a train? Ah, no problem! “Driving a train is” allegedly “a piece of cake”. Therefore the train driver let his daughter on the command of a train full of passengers. You know, in the art parents give private car driving lessons to their children.

“A train driver is accused of allowing his daughter to take command of a train while on a scheduled route with passengers on board, local reports said Wednesday.

The incident is alleged to have taken place on Sunday aboard a Proastiakos train traveling from Larisa to Thessaloniki, in northern Greece.

Witnesses reportedly protested after seeing a teenage girl enter the cab and taking control of the train with the driver’s permission.

According to the reports, a ticket inspector defended the driver’s move. “Driving a train is a piece of cake. After all, he is supervising the girl. Can’t you see he is standing next to her?” the inspector was quoted as saying.

The girl actually got to drive the train over an unspecified distance before giving in to pressure from the passengers to hand the control back to her father.

Some passengers contended that she in fact drove quite smoothly apart from braking sharply once, before entering a tunnel. (ekathimerini)

Thank God, Greece has no national airline, otherwise we could possibly see teenager pilots taking you from a to B. Yes, it’s the good old Greek civil servants’ mentality: what belongs to state is mine.

PS Greece’s state railways TrainOSE is top on the privatization list, I hear. 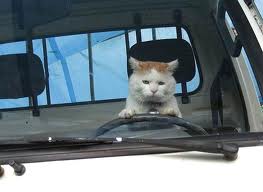 my cat claims: driving a lorry is a piece of tuna (BTW: this is NOT my cat on the photo!)