On 27. April 2012 many Greeks were stunned to watch an unprecedented case taking place on their television screens: the pictures, the personal data and the medical records of a prostitute arrested at an downtown Athens brothel. The 22-yer-old woman from Russia was found to be HIV-positive and aim of the public humiliation was to “to protect public health and inform her clients to undergo an AIDS test.”

Then Health Minister Andreas Loverdos (PASOK) turned a deaf ear to the criticism and the violation of personal date. Knowing that socialist PASOK was going to suffer massive losses in the general elections of May 6th as the socialist were implementing Troika imposed austerity policies, Loverdos was determined to play the public sentiment card.

On 29. April 2012  a new outrageous spectacle stunned again the Greeks: the pictures and personal data like home addresses or parents’ names and addresses of 31 allegedly HIV positive women were released to the public upon orders from the prosecutor. the majority of women were bearing visible signs of drugs use.

The women were arrested during a massive police operation in the area around Omonia Square in downtown Athens. First AIDS tests had shown that the women were HIV positive. Loverdos was determined to protect the health of the male Greek voters, the “holy” Greek family. The women were facing felony charges, while it was not even clear whether they were prostitutes.

“Ministers, police and medical authorities defended the operation as an urgent move to protect men and their families from the spread of the virus,” stresses Zoe Mavroudi, actress and screen writer, the director of Human Ruins a documentary film dedicated to these women and their public humiliation.

Zoe Mavroudi was as shocked about the incredible and public humiliation of those women without rights as much as I was.

“I was among many Greeks who were taken aback by an appalling and unprecedented spectacle that unfolded on our TV screens. The mug shots and personal data of 31 HIV positive people, all of them women, paraded on the evening news and morning talk shows…”

“It was hard, at first, to grasp what was happening. My initial confusion, however, soon gave way to anger,” she adds on the official website of Ruins.

Zoi Mavroudi dedided to translate her anger into a documentary film ‘Ruins: Chronicle of an HIV Witch-hunt’.

A 53-minute film about those women who deprived of their privacy rights were given prey to the wild: the media, the public and the voters. Zoe Mavroudi wanted to give back to those women their dignity.

Zoe Mavroudi explains that she visited some women in the prison and interviewed two of them who had been released. She also interviewed “two mothers, who endured the aftermath of their daughters’ public exposure in their small rural communities.”

Shame, public humiliation, silence, tears. The feeling of being helpless and exposed to arbitrariness, when the system conspires against you.

What is clear from the documentary is that in quite a number of cases, the HIV-tests were done without the women’s consent, that some women were homeless and were not caught by the police inflagranti with a customer.

Morover Mavroudi interviewed doctors, activists, HIV experts and journalists. However no official authority returned her calls requesting for statements and interviews. [Of course, not. Political fireworks last only one, two weeks before elections.]

The documentary will be shown to public on Sunday, September 15th 2013 at 7 p.m. at Benaki Museum, Pireos Street 138 in Athens. A discussion with the director and production film will follow. Admission is free. 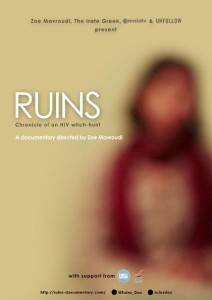 The documentary will be shown also in Thessaloniki on September 17th 2013 at 7 p.m. at Aristotle University.

KTG reported on the women’s arrest back in April, May 2012 here, here and here.