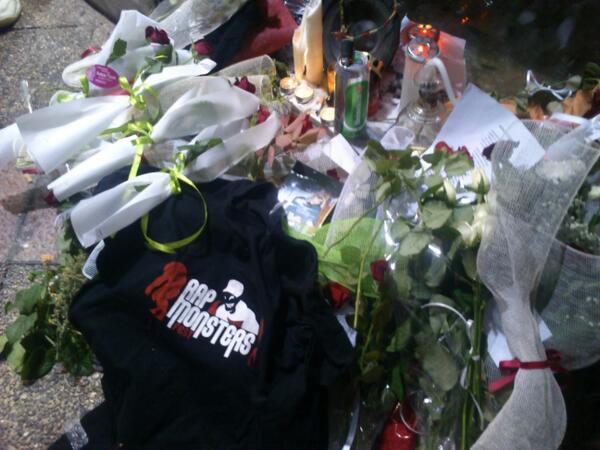 flowers, candles and other items were left on the spot where Fyssas was stabbed to death.

Media report that some protesters started fire in garbage bins and chanted slogans against the far-fight political party.

Tension is still high in the area, right now.

An hour earlier, protesters harassed, swore at and beat in the face leader of Independent Greeks, Panos Kammenos. While the men of his personal security tried to protect him, they were beaten too by the protesters.

Speaking to news website zougla.gr, Kammenos said that he was on foot heading to the spot where Fyssas was murdered in order to lay some flowers. Suddenly a group of protesters attacked him verbally first, then pushed him and hit him on the nose. Kammenos went to a nearby hospital to undergo some checks.

More than 10,000 people gathered on Wednesday afternoon in Keratsini suburb of Piraeus to protest the murder of Pavlos Fyssas.

Anti-fascists protests were organized also in many Greek cities.

Angry protesters reportedly attacked the offices of Golden Dawn in Patras in Western Greece,  and Chania on the island of Crete.

According to latest -but unconfirmed – reports, angry protesters smash shops in Thessaloniki, while molotov cocktails are being hurled in Xanthi.

Riots in Keratsini lasted for several hours with angry rioters smashing and destroying the windows of several shops. Some Greek media claim that rioters looted shops.

Police detained a total of 65 people of whom 23 were arrested.

In Thessaloniki 20 people were detained.